Women’s basketball knocked out in quarterfinals 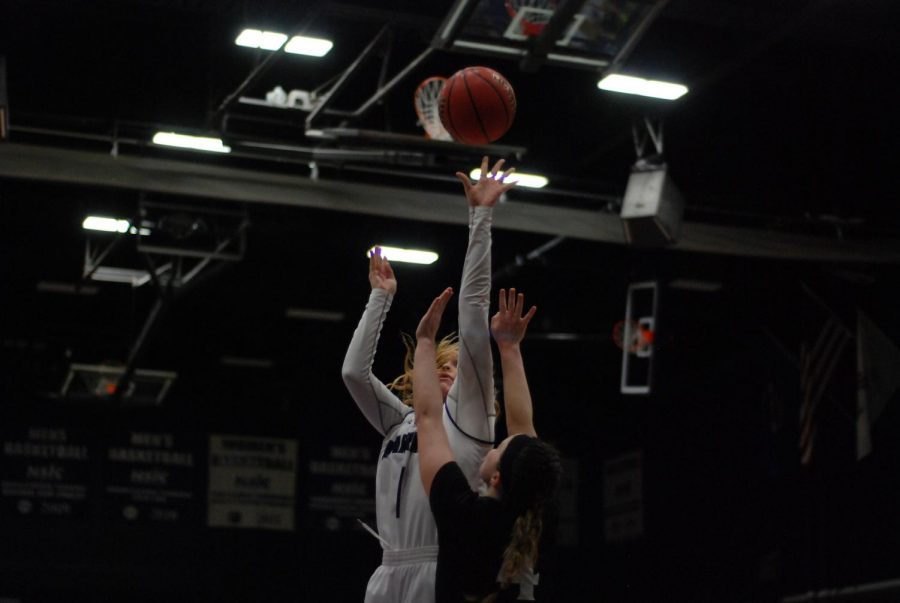 Junior Gabie Doud attempts to score against Minot State University during the first round of the NSIC Tournament on Wednesday, Feb. 27 in the McCown Gymnasium. The Warriors won against the Beavers, moving on to the next round where they ended the season with a loss against Minnesota State University Moorhead.

Winona State University’s women’s basketball advanced to the quarterfinals in the NSIC playoff tournament but were knocked out in a battle against one-seed Minnesota State University Moorhead.

It was a low scoring first half, as the two teams combined for only 36 points. Both teams were shooting well under 40 percent in the opening half that led Winona State into the locker room up 20-16.

“We struggled shooting the ball in the first half,” head coach Scott Ballard said. “A lot of it was because we were impatient offensively and took too many long quick shots, and we were only one for nine from three-point land.”

The Warriors showed strength defensively by holding the Beavers to single digits on the scoreboard in both of the first two quarters, while also forcing 10 turnovers and turning those into nine points offensively.

Winona State came out strong during halftime, padding their lead to as much as eight points throughout the third quarter. Minot’s dominance on rebounds kept it a close contest.

“[Player numbers] 14 and 10 are big rebounders for their team and 10 kept getting those o-boards, which was frustrating,” sophomore Taylor Hustad said. “But that’s like her game is getting o-boards and put backs, so it was really tough and they’d push you through and jump pretty high.”

Both teams scored more in the third quarter than the first two quarters combined, but the Warriors were able to hold their lead at 41-36 going into the final period.

“We knew it was going to be a lot tougher than the first time,” senior Kayla Schaefer said. “Match-up wise they knew more about us after playing us the first time and playoffs is always a battle. Anything can happen as the scores have proven throughout our bracket.”

Winona State struggled to stay ahead as Minot State caught up early in the fourth quarter, closing the gap and getting ahead by one with 8:36 left in the game.

It was a back and forth game for a few minutes as the lead changed each possession. The Warriors were able to pull ahead and stay ahead after a three-point shot by Schaefer with 4:42 left in the contest.

“I feel fortunate that we were able to make plays in the last five-six minutes after we fell behind for the first time and because they went with a small line up then we had to go with a small line up,” Ballard said. “After we had the time out, we got behind by one for the first time, then I don’t think we had any turnovers in the last six or seven minutes. Schaefer made some big-time shots and we needed every one of them.”

The team came together in the last few minutes as four Warriors scored on offense to keep them in the lead. Junior Gabie Doud provided big for Winona State in the final minutes, as she scored five of the Warriors next seven points as the home advantage extended to 56-51 with 1:36 remaining.

“Gabie sprained her ankle Saturday, so we didn’t know if she was going to be able to play tonight or not,” Ballard said. “That’s why we didn’t use her in the first half, but we felt like we had to in the second half because they went with a smaller line up.”

This proved true as Doud was the third leading scorer, coming off the bench scoring 11 points in the second half of play.

Schaefer led the team with 16 points and five rebounds.

“I knew it was a close game and being a senior, you have to leave it all out there,” Schaefer said. “If we wouldn’t have won, we were going home so I knew that coming in and it was getting to be a grind and down to the wire, so I just kind of took over I was just trying to help my team out. We needed to score so it just kind of happened.”

Hustad recorded a career-high 14 points in the win and a team-high six rebounds.

“It was a battle down low and [Hustad] did a good job getting those boards that we needed,” Schaefer said. “That creates a lot of possessions for us, especially o-boards, and defense just killing their offense is what gives us a chance.”

Although Winona State was shooting an uncharacteristic 24 percent from beyond the arc, they were shooting 48 percent inside the arc to make up the difference.

“I’m proud of how resilient we were, we bent but we didn’t break. We didn’t lose our composure,” Ballard said. “We looked like we knew how to finish the game, that’s important. We had a lot of close games this year, we made our free throws down the stretch and took care of the ball. That’s what you have to do to finish a game.”

After the win against Minot State, the Warriors prepared for the contest against Moorhead.

“It’s exciting, we get to go back to the Pentagon, we’ve earned it. It was a hard fought win tonight, and nobody got hurt,” Ballard said. “It’s going to be fun getting ready for that. [For] freshmen, it’s going to be the first time they experience this and it’s a great venue, so it works out.”

Although Moorhead is one-seed in their division, there were already many upsets in the bracket.

“The reason it’s called March Madness this time of year is because a lot of teams play with a sense of urgency that they had not played with leading up to this and that’s why you have upsets,” Ballard said.

The game plan going into the quarterfinal game, according to Ballard, was to focus on rebounding and not have a bad quarter.

A bad quarter proved to be the downfall of the Warriors as they fell to the Dragons 72-67.

“It was a great women’s college basketball game to a be part of,” Ballard said. “It was two really good teams playing a high caliber of basketball and going at each other for 40 minutes.”

The Warriors started off strong shooting 60 percent from the field in the opening frame. Senior Rachel Novotny and Schaefer combined for 14 of the Warriors’ 19 first quarter points as the duo went seven-for-eight from the field.

Winona State continued to shoot well, shooting a combined 55 percent over the first half of play. Although they did well shooting from inside the arc, the Warriors went just 2-for-8 from downtown in the first half of action with sophomore Julia Silloway accounting for both buckets.

The Warriors went into the locker room up 36-31.

Winona State held the lead in the third quarter, going into the final period up by eight and quickly extending the lead to 11 with 6:23 to go in the contest. From there, Moorhead hit five quick three-pointers to demolish the Warriors’ lead.

“We controlled their inside game and rebounded with them better than the first time we played them.  We executed well on offense and attacked them well inside,” Ballard said. “We played really well and controlled the game till they started hitting NBA three’s in the last five minutes of the game.”

The Warriors went cold on offense for almost the rest of the contest.

“We cooled off in the fourth quarter and stopped making shots at the rate we had the first three quarters,” Ballard said. “When they got behind by 11 points and in foul trouble the fourth quarter they got aggressive from three-point land and hit five really deep three’s that erased our lead.”

Although the Warriors were unable to come away with the win in this game, they still fought for it for the entirety of the contest.

After being out-rebounded in the first half, Hustad made her presence known in the post throughout the second half. Hustad scored six points and pulled down five boards in just the third quarter. Hustad produced the first double-double of her career off the bench with 12 points and a team-high 10 rebounds.

Novotny tied for the team lead in her final collegiate game.

The two teams came out even on the glass with 34 rebounds each, but Moorhead capitalized on their only offensive board in the fourth quarter that came off of a missed free throw with 18 seconds left in the contest to extend their three-point lead and obtain the victory.

“I was really proud of how hard and tough we competed against the bigger team that was the #1 seed,” Ballard said. “We played to win and almost pulled it off.”

This loss ended Winona State’s season with a 15-13 record.

“It was a challenging season because of all of the close games we had, and we never put together a long winning streak,” Ballard said. “However, anytime you win more games than you lose, it is a successful season.”

Not only did the Warriors end winning more games, Novotny and sophomore Allie Pickrain were both named to the 2018-19 NSIC All-Conference Team. Novotny is a two-time NSIC All-Academic recipient but earned All-Conference honors on the court for the first time in her career. Pickrain earned All-NSIC Second Team recognition for the second-straight year.

“We had some exciting come from behind wins on the road and we got to host a playoff game for the first time in three years. More importantly, we got to see the development of many of our young players which is encouraging for our future and also watched our two seniors have the best year of their respective careers,” Ballard said. “For next year, we will be looking to build on the success we had this year through a good off-season skill development program and the addition of a strong incoming freshman class.”