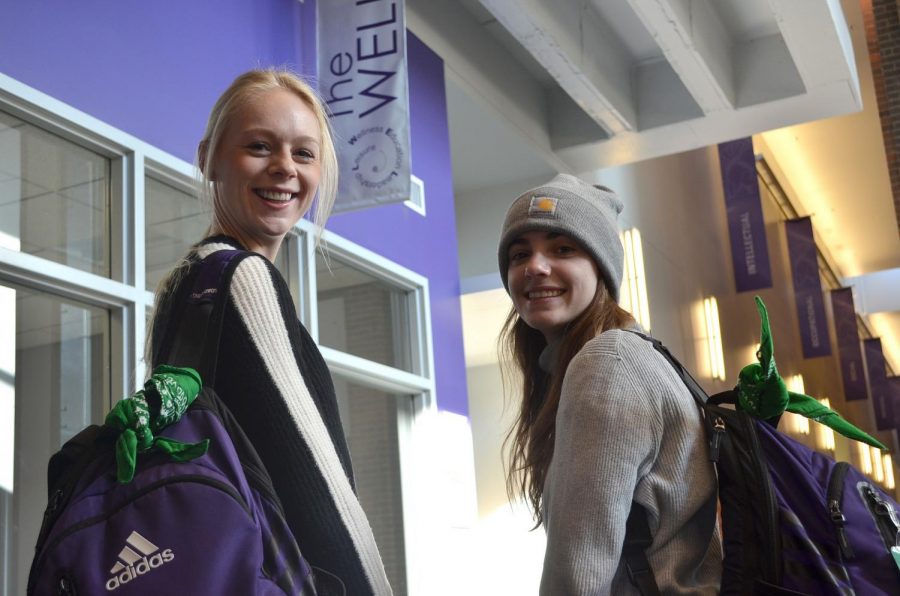 Senior Kari Schneiss and junior Taylor Juresh are the founders of the Winona State chapter of the Green Bandana Project, a national program that brings awareness to mental health issues. Information about the project can be found in The WELL and on the Winona State website.

The nationally recognized Green Bandana Project has recently brought its force to Winona State University through the help of two students.

Taylor Juresh, junior recreation, tourism and therapeutic recreation major, said she was dealing with depression at the beginning of the 2018-19 school year.

She began researching support systems to better understand what was going on with her as the depression “took a big toll” on her.

Juresh said she found an article about the Green Bandana Project at another university and thought Winona State should have it here.

Juresh and Schneiss are both members of the Winona State track team and with the help of Counselor Mick Lynch and Kate Noelke, director of integrated wellness, have started the Green Bandana Project at Winona State.

Schneiss explained how Juresh came to her with the idea.

“One day Taylor was showing me all this stuff and said ‘We need to do this, this needs to be on our campus. If I would have seen a green bandana when I was having a bad day, or before I told anyone,  just having that comfort of ‘you’re not alone’’ would have been super huge in her getting help,” Schneiss said.

To get the project started at Winona State, Schneiss and Juresh spoke with Lynch and Noelke, before presenting to Student Senate.

Between Student Senate and the Student Union the project was funded. Allowing Schneiss and Juresh to purchase resource cards, ‘how to help a friend’ cards and bandanas.

Because of Juresh and Schneiss’ presence on the Winona State track team, the project had an outreach to student athletes before spreading to the remainder of the campus, reaching organizations and individual students.

To obtain a green bandana to tie onto your backpack, you must take the pledge that can be found on the Winona State website. The basis of the pledge is once the bandana is on a backpack the persons agrees to help others who may need it and if that person themselves need help they will seek it.

Juresh and Schneiss said if a student on campus would like their organization to be reached by the Green Bandana Project, they would be the ones to contact.

Mick Lynch elaborated on the project.

“When you see a green bandana, [you know] there’s someone who supports,” Lynch said.

Lynch continued with reassuring that the project is open to students, faculty and staff at Winona State, and the bandanas are a sign of support.

“The overall hope [is that people will] be aware that, ‘Oh my gosh, someone cares about other human beings here who may be struggling’ and increase awareness, decrease stigma [and] increase help seeking for people with mental health,” Lynch said.