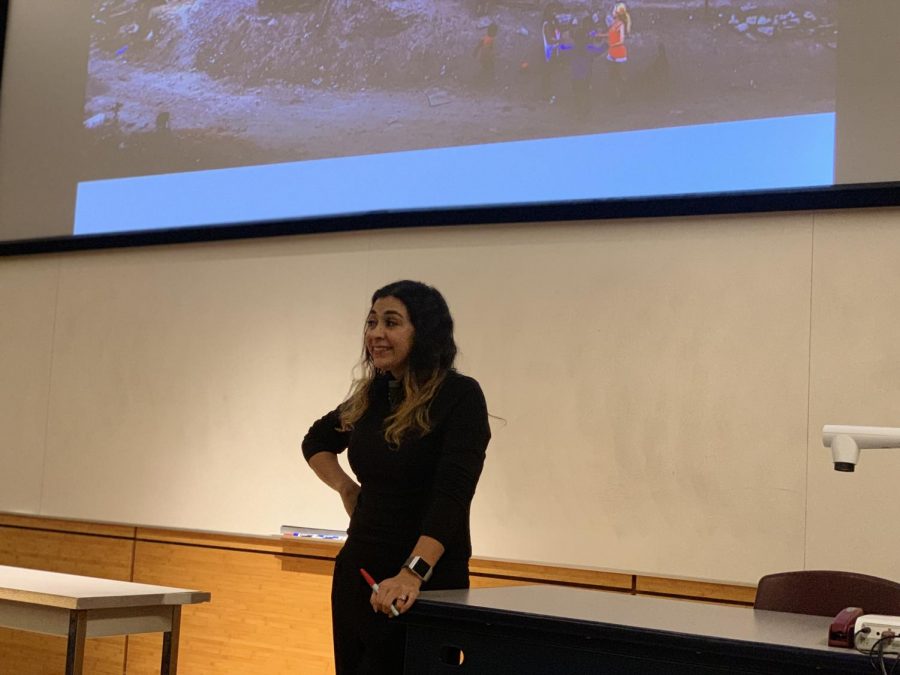 Colette Ghunim speaks in Start 120 on Wednesday, Feb 27 about harassment against women in the Middle East, the presentation also addressed theories about how to end injustice in Mexico and Palestine. This talk was the first of many co-sponsored by the inclusion and diversity department to celebrate women throughout Women's History Month.

To honor Women’s History Month, many departments throughout Winona State University and the inclusion and diversity office co-sponsored the first of a series of events taking place this month to recognize women.

On Wednesday, Feb. 27, Colette Ghunim, documentary filmmaker, was invited to Winona State to show the documentary she co-directed titled “The People’s Girls.”

“The People’s Girls” is a documentary about sexual harassment toward women, specifically in Egypt, and focuses on how women are fighting back in a patriarchal society. Before the documentary, Mary Jo Klinker, a women’s, gender and sexuality studies professor, and Alexis Salem, representative for the KEAP council and the RE Initiative on campus, had a short introduction and presentation on Winona State’s statistics on reported sexual assaults, harassments and abuse situations.

“Winona State is a one-in-five university,” Salem said. “That means that one in every five women on campus have been affected by some form of sexual harassment, abuse or assault.”

“It’s critical to examine women’s movements for liberation both locally and globally, which is why the presentation began by drawing connections to the pervasiveness of gender-based violence here in Winona and abroad,” Klinker said.

Ghunim then started her presentation and explained while sexual harassment has been flooding social media, it shows women in a negative light.

Ghunim wanted to inspire women to fight back and to see that sexual harassment is never the victim’s fault.

“Due to the recent local media attention to the issue, we feel this is the perfect time to create a documentary that will analyze the causes of sexual harassment, provide alternatives to traditional thought and document women fighting back in creative ways,” Ghunim said.

Ghunim was inspired to direct the documentary because she noticed sexual harassment growing rapidly in the last few years and wanted to do something about it instead of passively watching and being harassed herself.

“We wanted people who previously did not consider sexual harassment a big issue to realize the immense impact it has on all levels of society,” Ghunim said. “Our goal was also to break the stereotype of the victim being to blame. We hoped to inspire more women, in Egypt and beyond, to feel empowered to stand up for their rights, and react to the harassment they face.”

violence in her gender and communication course.

Falc encouraged students to educate themselves on gender-based violence and understand the effects of sexual abuse.

caused by gender-based violence and also understand our right to have educational environments and workplaces that do not have unwelcome sexual behaviors or gender-based abuse or intimidation,” Falc said.

Ghunim encouraged students everywhere to watch the documentary because it tells victims of sexual harassment they are not at fault and others who do not believe sexual assault is a prominent issue that it is common worldwide.

“We’re hoping that after our documentary gains momentum, people who previously did not consider sexual harassment a big issue will realize the immense impact it has on all levels of society and that we will be able to break the stereotype of the victim being to blame,” Ghunim said.

Ghunim’s documentary is one small step toward understanding sexual harassment and said she hopes to inspire those who watched the documentary and walk away having learned something and feeling a little more sure of what they are capable of.

“We hope to inspire more women, in Egypt and beyond, to feel empowered to stand up for their rights, and react to the harassment they face,” Ghunim said.