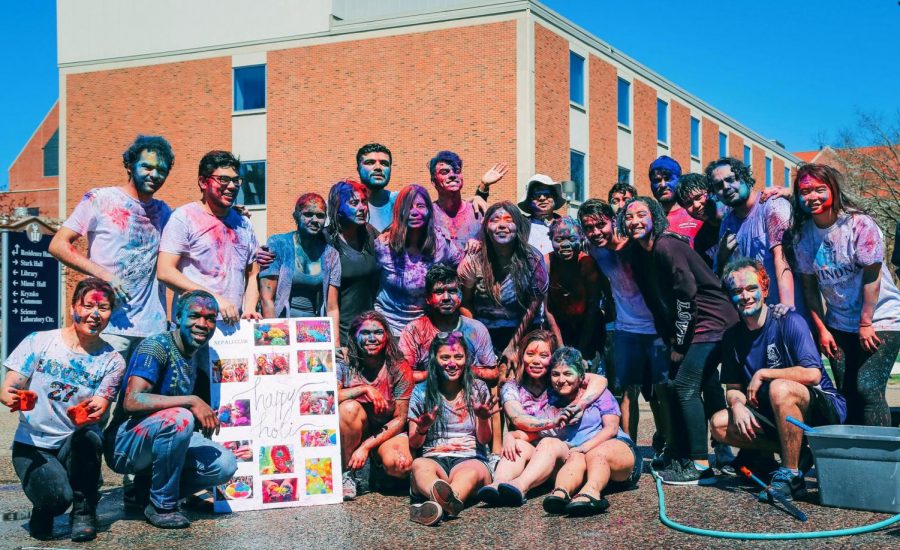 The Winona State Nepali Club hosted the Holi Festival at the gazebo on Friday, April 19. Also known as the “Festival of Colors,” the celebration uses colored water and powder to mark the end of winter, the start of spring and new beginnings in Hindu culture.

Students and members of the Winona community gathered at the center of campus to celebrate one another and the new connections made through playful activities full of joy and color.

The Holi Festival, also known as the “Festival of Colors,” is a celebration in Hindu culture. The day of the Festival is known as marking the end of winter and welcoming the spring season, while celebrating with others to create new beginnings.

A huge part of the celebration is the literal vibrancy of it, as all who celebrate are invited to rejoice in colored water and powder, throwing it into the air and dousing one another in it.

“The vibrancy of colors is something that brings in a lot of positivity in our lives,” Nepali Club President Ramila Barun Shrestha said. “Holi is a day worth rejoicing.”

Held from 12-2 p.m., the Nepali Club opened the festivities to both students and the community of Winona. The festival was even more noticeable at the center of campus due to classes not being held because of Spring Break Day.

Community members brought their children to the event to celebrate alongside Winona State students, making for a joyous display of interaction. Students who were a part of the Nepali club and as well as non members showed up to participate in the celebration, mingling alongside community members.

“I came because my friends told me about it and I wanted to experience something new,” Gregory Lito, a transfer student majoring in Creative Digital Media, said. “[The most fun part] is all of the colors, playing with the water, and the weather was great!”

Lito, in the midst of the celebration, was covered head to toe in splashes of fuchsia and blue from the colored powder being tossed around and said he would definitely be attending the Festival again.

The Holi Festival is based on a legend in Hindu culture about King Hiranyakashipu and his children. Hiranyakashyapu had a son named Prahlad, whom he wanted to get rid of, as well as a daughter named Holika.

Holika is said to have had a magic robe that would protect her, so the King sent both his son and daughter into a burning fire thinking that Holika would survive while wearing the robe, and Prahlad would die. However, the result was the opposite of what the King had intended. It is believed that “no one can harm the person who has God as their savior,” and so Prahlad came out of the fire safely while Holika died. So, the day is celebrated with joyful colors and interaction to mark the victory of goodness over evil.

The Nepali Club had been preparing for the Holi Festival all semester, gathering colored powders to be thrown in celebration, water balloons and shooters, snacks and Masala Chai, a type of Nepali tea.

Throughout the entire event they played Bollywood and Nepali Holi songs to further add to the fun of the celebration, and many danced to the music.

The excitement drummed up through the playful splashing of water shooters and balloons filled with color. It grew to the point of many taking the water hose itself to further spew water into the air and onto one another.

The Nepali Club advised those in attendance to not wear clothes they were cautious of getting dirty, or in this case, tie-dyed.

“I had so much fun,” one participant said as she and her family left the event and ventured off campus, all of whom were wet with bright colors that lingered on their faces and clothing.

The Nepali Club received feedback during and shortly after the event ended, finding that the participants’ favorite part of the celebration was getting to enjoy Mithai (Asian sweets) and the Masala Chai as well as the obvious fun in playing with water and colors.