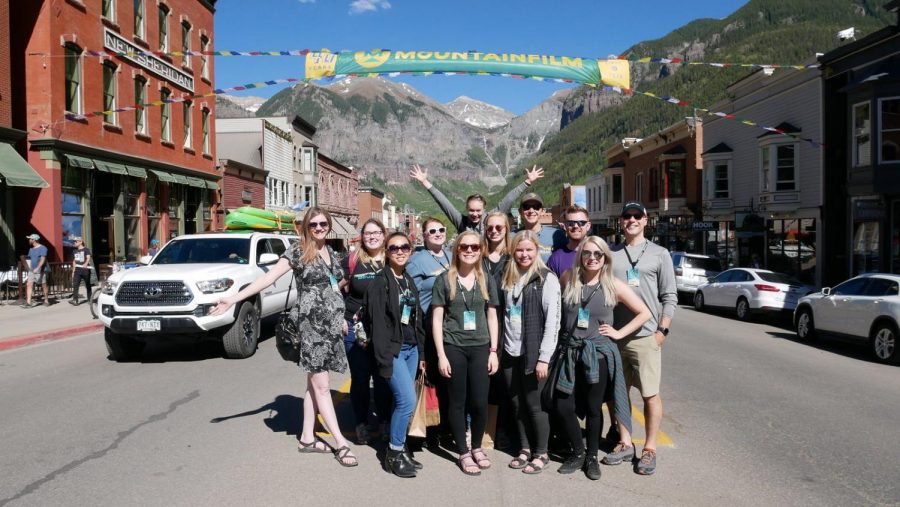 The students of the 2018 travel study to Telluride, Colorado for the Mountainfilm Film Festival stand in the town's center. The festival showcases documentary films about environmental, political, cultural and social justice topics.

In the week leading up to and including Memorial Day weekend, Winona State University’s film studies department will be hosting a travel-study in which students are given an opportunity to visit Telluride, Colorado, and experience the annual Mountainfilm Film Festival.

Not to be confused with the town’s other film festival, the aptly-named Telluride Film Festival, Mountainfilm is documentary-based, curating nonfiction stories that explore topics like the environment, culture, recreation, political and social justice issues and more.

This will be the second year in a row for the travel-study.

English and film studies professor J Paul Johnson, who is co-leading the travel-study with former director of the Frozen River Film Festival Crystal Hegge, said he hopes students will learn from the festival and the course.

Johnson said a festival like Mountainfilm provides attendees with a chance to see a breadth of career opportunities.

“Novice-level understanding of film is typically predicated on people being aware of … somebody who’s hitting the headlines with big breakout blockbuster films,” Johnson said. “What many people don’t understand … is that there are thousands and thousands of jobs in this industry at all levels.”

According to Johnson, Mountainfilm teaches people that film jobs burrow deeper than what is displayed on a teaser poster.

“There are people who are deeply invested in and working hard at the production of films,” Johnson said, listing grips, gaffers and sound technicians as examples, while also adding there are jobs in filmmaking that do not “necessarily involve being the director of ‘Avengers: Endgame’ or ‘Black Panther.’”

Another important concept students learn is even the best in the industry start at the bottom.

This concept was amplified during the 2018 travel-study to Mountainfilm when students had a chance-meeting with Barry Jenkins, director of the 2017 Academy Award winner for Best Picture “Moonlight.”

Johnson said Jenkins, like all students of film, started at the bottom and worked his way up.

“He remembered very well being at the start of his career,” Johnson said. “He remembered getting to go to a film festival for the first time, getting to meet a few directors, going up to a couple of others, tapping them on the shoulder, asking if he could have a minute of their time. He was superbly gracious with students and talking about that.”

Johnson said he believes those who attended the 2018 travel-study returned to Winona with a greater appreciation for filmmaking.

“I guarantee students came back awed … by that experience and really motivated by it,” Johnson said. “I think if you talk to any of them who went there last year, I’m pretty confident that that is what they’ll say.”

Film student Brynn Artley, a sophomore who took the travel-study in 2018, agreed with Johnson.

“I had a ton of fun, highly recommend the trip,” Artley said. “We saw a ton of different films in the span of three or four days. We wrote up reviews, we made blogs about it. It was just a lot of fun.”

While any student can register for the course, Johnson said film majors and minors are ultimately given precedence over others.

“We have a built-in selection system, in that it requires a 2.5 GPA,” Johnson said. “We do give priority to declared film studies majors and minors.”

Johnson added a vetting process would only take place if the course had more students than necessary.

“We rank and evaluate applicants if we have more than 20,” Johnson said. “I would not at all be displeased if we had so many people wishing to go on this program that we had to make those kinds of decisions. That would be a good problem to have. But right now … I’m pretty comfortable with where we’re at.”

A caveat of the travel-study is the price.

Despite her taking the travel-study this year, Brittany Bluhm, a senior double majoring in English writing and film studies, discussed her past financial constraints and how they kept her from taking the course and attending the festival last year.

“I was hung up on rent and a lot of medical bills,” Bluhm said. “I was like, ‘There’s no way I can come up with $500 (the confirmation deposit) to stash toward the trip.’”

According to the brochure for 2020’s travel-study to Telluride, the cost fluctuates around $3,000, which includes tuition and student fees for the three credits linked to the program, as well as roundtrip airfare, transportation during the program, lodging, breakfasts and dinners, admission and event fees for all educational activities and the Study Abroad administrative fee.

The price is discounted, as well, as Bluhm said students taking the course will be volunteering with film screenings and other activities.

While she was unable to go last year, Bluhm said she understood the reasoning for the price.

“I think, because our film program is relatively new, I can understand why it’s maybe a little bit more expensive,” Bluhm said. “I anticipate the school will contribute more in the future as long as this trip keeps on going.”

According to Johnson, while more people would logically bring the price down, that would also mean jeopardizing the level of attention he is able to give in his instruction for the course.

“The price—the bottom line for the trip—would go down if we had 20 people instead of 12,” Johnson said. “I wouldn’t be opposed to having 16 students or even 20 as the cap … but it would be a different experience for me, a more complex one, and I don’t know if my students would get the individual attention that I know they will get with 12.”

Johnson said the price of the travel-study is lower than other travel-studies offered by the school.

“Any travel-study is an expense,” Johnson said. “Our travel-study to Mountainfilm is about half the expense or less than any of the international studies … Normally to travel abroad, earn three credits, over a period of one to two weeks, it is going to set a student back probably about $6,000. The price for our students, including the tuition, air travel, lodging, festival expenses, etcetera, is about $2,600.”

Johnson said he and co-leader Hegge do everything they can to keep the expenses as minimal as possible.

Cost aside, Johnson said he was satisfied with last year’s study and said he hopes this year’s travel is a repeat.

“There’s not really anything that we aim to do differently this coming year than we did last year,” Johnson said. “We just hope to replicate what we’ve done. It is a really nice experience for students to be able to do this … We have a really good partnership with Mountainfilm, and it’s a great destination for people to be at.”