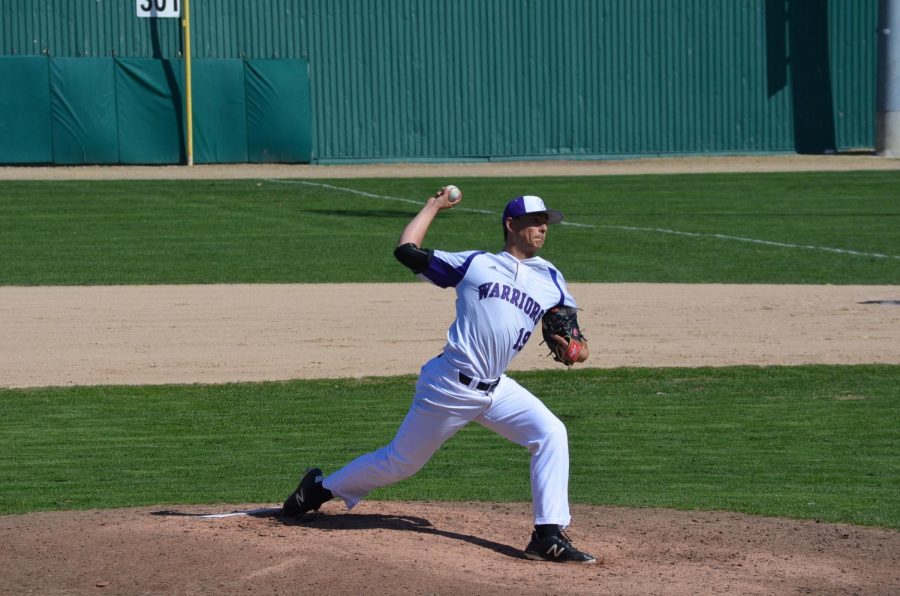 Junior Nathan Looms pitches against the University of Sioux Falls on Friday, April 26 at Loughrey Field. The Warriors played the Cougars in three games over the weekend, coming away with two wins and a loss.

Winona State University maintained a position for a potential postseason berth, after gathering two wins in their weekend series with Sioux Falls at Loughrey Field.

The Warriors lost the opener of the three-game series to the Cougars, 7-4, and bounced back the following game with a walk-off by junior outfielder Chad Herbst in the bottom of the ninth to give Winona State the win 7-6.

In game one the Cougars got the best of the Warriors, losing 7-4.

Sioux Falls came out of the gate putting up the first run of the game.

In the bottom of the second, Winona State responded with four runs started off by junior outfielder Andrew Pliner three-run homer.

Junior catcher Nick Nalewanski made a sacrifice fly to center field, which brought sophomore first base Austin Savary home pushing the score to 4-1.

However, Sioux Falls would go on a tear for the rest of the game bringing in six unanswered runs to win the game.

In game two, the Cougars carried their momentum from the first game, as they came out and scored 3 runs to end the second inning.

The Cougars ran the score up to 6-3 within the fifth inning off of a couple of RBI singles but, Winona State would make a comeback.

The rally started with a two-run home by Williams run that helped Stange get his second run of the game. Then another home run that was blasted by first-year outfield Mitchell Seager to make the game 6-6.

In the ninth inning Herbst hit a sacrifice fly to center field to bring Stange home and give Winona State the walk off win.

The game started very slow through the first five innings, but Sioux Falls got the ball rolling in the top of sixth, scoring four runs.

Eventually, Winona State got off of the ground, scoring three runs off of Seager’s double to left field, which sent Nalewanski home.

The Warriors will look to carry the momentum of the series win against Concordia University, St. Paul, who they play Wednesday, May 1 at 1:30 p.m. and 3:30 p.m. at home.