Football gears up for new season 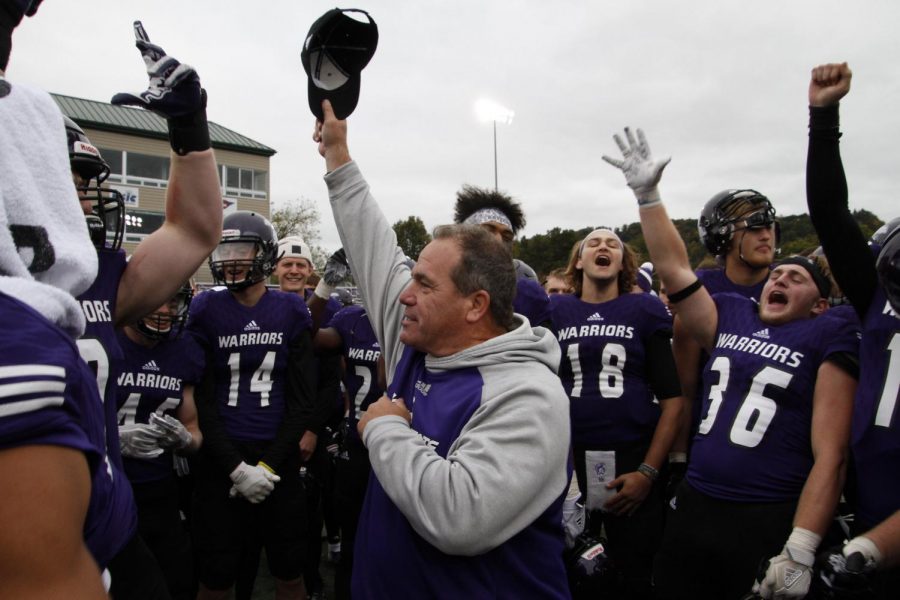 Head Coach, Tom Sawyer, leads the team in a celebrtatory huddle folllowing a home game at Maxwell Field. The team held a record of 8-3 last season.

For the first time in the 2019-20 school year, the Winona State University football team is set to return to the field for their opening game against Wayne State College on Saturday, Sept. 7.

Last season, Winona State took a small step back after a big 2017 season by barely missing the playoffs with an 8-3 record.

This season, Warriors fans will look forward to the return of senior linebacker Nick Pridgeon being voted the NSIC South Preseason Defensive Player of the Year.

Pridgeon, along with junior receiver Jake Balliu and junior defensive lineman Michael Gomez, are all coming back from season-ending injuries.

On defense, the team has junior linebacker Devon Moore, and the team tackle leader, senior defensive back Cole Monckton returning.

The team will also have standout returner and junior defensive back, Isaiah Hall, who was tied for the Warriors’ interception leader.

On offense, junior quarterback, Owen Burke is returning as his second year as the starter.

The unit will also have back the running back tandem of junior Sam Santiago-Lloyd and, senior Javian Roebuck, who combined for more than 1,000 yards and seven touchdowns.

Roebuck compares the duo to NFL stars, Alvin Kamara and Mark Ingram II, who were in the backfield for the New Orleans Saints last season.

The senior running back also spoke highly of Santiagio-Lloyd.

“Sam’s a good running back. He’s physical I learned a lot of things from him on the sideline we communicate he tells me what he sees, and I tell him what see” Roebuck said.

Although there is some returning talent on both sides of the ball, a lot has changed since last season for the Warriors.

On offense, they lost key contributors in tight end Greg Rooney, running back Eric Birth and receiver Isaiah Frandsen, who lead the team in catches, yards, and touchdowns.

Roebuck also spoke on how the loss of Eric Birth will affect the running game.

“It’s going be tough because Eric has more experience than both of us,” Roebuck said. “He saw different things that we didn’t, but I feel like we should be okay because we got some experience under our belt.”

The schedule opens up with toughest games starting week two with an early season trip to the University of Sioux Falls, who they edged out a 16-15 last year.

In weeks three and four the Warriors face Upper Iowa University and travel to Minnesota State-Mankato, both teams who last year the Warriors lost close matchups to.

For the 2019 season will Burke, Gomez, Moore and Pridgeon will serve as team captains.