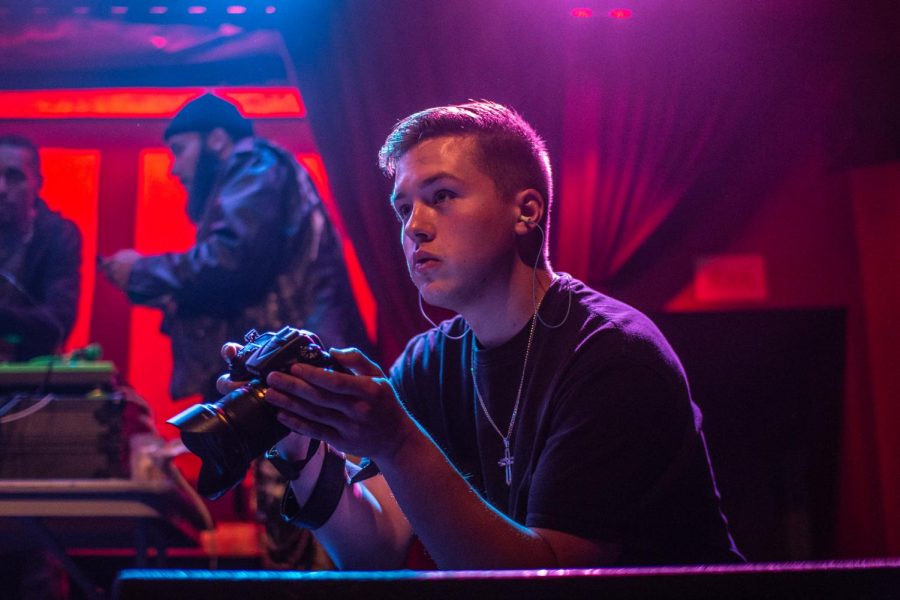 Winona State University alumnus Shayne Bruyere works as a photographer at “Los Dells,” a latin music festival held at Wisconsin Dells. Bruyere graduated in spring 2019 with a degree in Mass Communications - Advertising, he now works as an assistant to professional photographer Joseph Leute. The two travel around the country photographing various events.

Every year, college students complete their degrees and begin the process of job hunting to start their careers. Some students do not end up looking for too long, which is exactly the case for Winona State University alumni Shaye Bruyere.

Graduating from Winona State this past spring with a degree in Mass Communication -Advertising, Bruyere found a position as an assistant photographer to Joseph Leute, professional photographer.

Bruyere realized his interest in photography during a Visual Communication class with professor Tom Grier, during his third year at Winona State.

“I remember [Bruyere] in the Visual Communication class as quiet and curious,” Grier said. “I could tell he was listening and applying what he learned to his own photographs.”

Bruyere began to get involved in photographing concerts and various events in Minnesota.

“I think my first concert I photographed was Joey Bada$$ in 2018,” Bruyere said.

It was at the 2018 “Los Dells” festival that Bruyere found his first big break in commercial photography, after capturing a rare moment in the crowd.

“A guy hopped up on someone’s shoulders and got pelted with about 50 beer cans and I was the only photographer who got the shot,” Bruyere said.

Future employer Joseph Leute was coincidentally in the same crowd, and unfortunately in the middle of switching lenses, unable to capture the moment. Luete was working as the festival photographer and later connected with Shaye.

“I saw his photos in camera and hired him on the spot,” Leute said.

“For a photographer with little experience, Shaye understood that vision and observing people, waiting for a moment to unfold was more important than the gear he was shooting it with,” Leute said.

After the festival wrapped, Bruyere finished up his spring semester at Winona State and graduated without a concrete plan. Just days into the summer, however, he got a call from Leute to work as an assistant for the next few months, and he accepted.

The first weekend of September marked the anniversary of Bruyere meeting Leute at the Los Dells Music Festival. Both photographers are teaming up to officially shoot the 2019 festival.

For some students, finding a career straight out of college is not always easy, especially when it comes to photography.

“Get as much experience as you can while in school,” Grier said.

With “Career Readiness” as the Winona State theme for the year, Bruyere offers key advice to graduating students.

“For current students, professionalism and repetition are very important while dealing with clients,” Bruyere said. “If there is something you want to shoot just ask, the worst someone can do is say no.”

From student to shooting photos across the country in less than a week, Shaye is a great example of what potential opportunities are available post-graduation.