Burke throws for career-high in opener 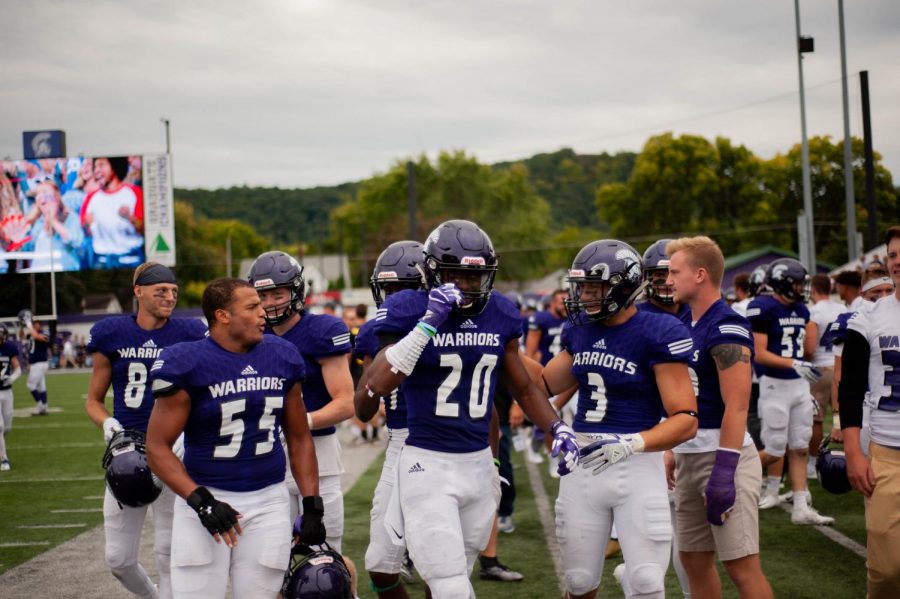 The game began with the Warriors struggling to find the end zone, as the first drive of the day would ended with a 25-yard field goal by senior kicker Paul Ortiz.

On the opposite side of the ball, Winona State had no problems.

The Warriors quickly ended the Wildcats’ first drive with a three and out, and then ended their second with an interception by senior linebacker David Smith.

However, the offense failed to capitalize on the turnover, settling for another field goal.

After another quick stop of the Wayne State offense, the Warriors would finally get their first touchdown coming off a six-yard pass from junior quarterback Owen Burke, to first-year receiver Dakota Matthees, extending the lead to 13.

The second half had a slow start but picked up when fourth-year defensive back Cam Gavin, would snag an interception.

This led to a 31-yard touchdown pass from Burke to sophomore receiver Tyler Knutson.

On the ensuing drive, Wayne State responded with a touchdown pass of their own to make the game 23-7.

Despite this, the Warriors would not be phased, scoring again, this time on a 44-yard run by fifth-year running back Landon Jacobson.

Winona State kept the momentum rolling with another interception by Gavin, which was immediately followed by a 48-yard touchdown pass from Burke to first-year Sawyer Maly.

Wayne State would not die though, as they returned the following kickoff for six.

The Wildcats would score again but their comeback effort would come up short.

Burke, who provided the bulk of the points, completed 69 percent of his passes for 313 yards.

“You know, I think we just came out as a team just ready to play,” Burke said. “It’s been a long build up to this, and I think we’re pretty happy with the product we put on the field, but we still got a long way to go.”

On defense, it was Gavin and his two interceptions that highlighted the day.

He is not letting the win get to his head though, focusing on the tasks ahead of a long season.

“First of all, we have to get out at our practice. It starts tomorrow,” Gavin said. “Once we watch this film, go over it and see what we can do to get better on assignments and alignments, and then just carry the same tempo through our practice and then go on to the next game with the same attitude.”

With the focus on the long schedule ahead, the Warriors will look to keep their winning ways going into next weekend, where they will travel to the University of Sioux Falls on Saturday, Sept. 14.