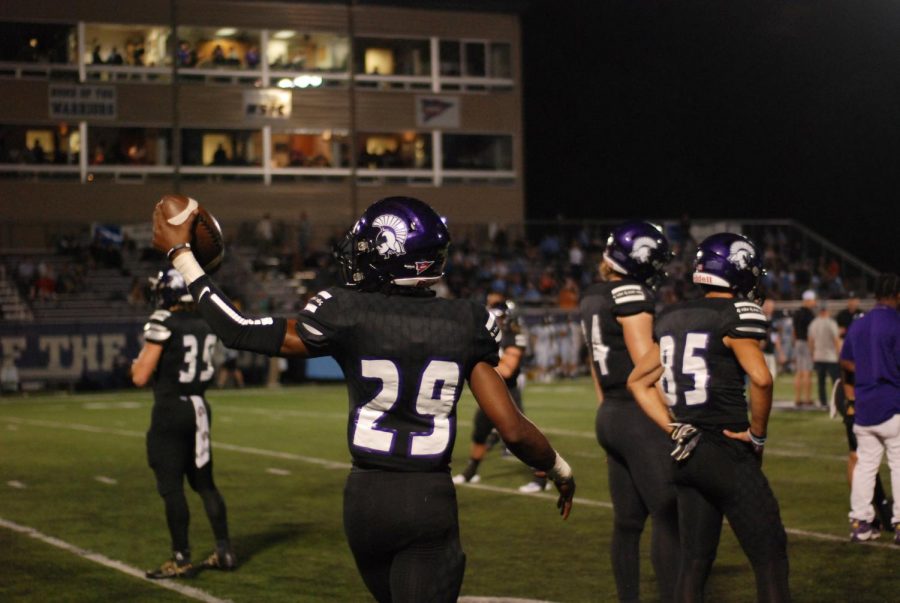 Winona State junior, Javian Roebuck, raises the ball in the air during the post-halftime warm-up on Thursday, Sept. 19 against Upper Iowa University. The Warriors secured their second win of the season against the Peacocks, scoring 28-0 at Altra Credit Federal Union Stadium.

It was a bounce-back week for the Winona State University football team, who won their Thursday night matchup against Upper Iowa University, 28-0.

The game got off to a slow start, as both team’s opening possession ended with a punt.

It was a little bit of trickery that would eventually get the Warriors rolling, as a pitch to junior running back Sam Santiago-Lloyd would go from an ordinary run to a big-time pass in the blink of an eye.

The ball would fly through the air 22-yards into the hands of sophomore wide receiver Ethan Wittenburg for the team’s first touchdown of the night.

When asked where the play came from, Santiago-Lloyd smiled.

“We always got a couple trick plays that Coach Sawyer’s played, but we just got to execute when we get them. We only get a slim chance for them,” Santiago-Lloyd said.

After another sequence of three and outs by both teams, it was time for another big pass.

This time the connection would come from junior quarterback Owen Burke to junior wide receiver Tyler Anderson for a 10-yard Warrior touchdown.

The first quarter provided quite the show, but the second saw the game slow down, with both teams struggling to put up points, followed by Upper Iowa missing a field goal.

However, with just three minutes remaining in the half, Burke and Santiago-Lloyd led the Warriors down field, setting up fourth-year running back Landon Jacobson for a four-yard rushing touchdown, bringing the lead to 21.

After halftime, the game continued to be quiet, with neither team scoring during the third, though the Warriors would see a fumble recovered by senior defensive back Cole Monckton.

The final quarter of the game started off with a long offensive drive by Upper Iowa and end with an interception by senior defensive back Romario Gayle, killing the Peacocks momentum.

The Warriors capitalized as, Santiago-Lloyd broke off for 59-yard rushing touchdown.

Santiago-Lloyd, who proved to be the star on offense, ended the day with a career-high 131 yards rushing yards, along with two catches for four yards.

“It was a good team win, but all wins are hard to come by in college football,” Santiago-Lloyd said. “You just got to keep pounding. 24-hour rule, so now we’re on to next week, got to focus up. Got a big week ahead of us.”

It is important not to forget about the Warrior defense though, who ended the night with another interception by second-year linebacker Clay Schueffener, and a forced three-and-out to close out the game.

One of the men leading the charge on the defensive side was sixth-year linebacker Nick Pridegon, who led the team with seven total tackles.

It was an impressive turn around for a unit that gave up four touchdowns in a big loss to the University of Sioux Falls less than a week ago.

“It was just everybody doing their job, trusting that everybody’s going to be there, and communicating, and just playing physical,” Pridegon said.

With their game being early this week, the Warriors will get a chance to enjoy the win a little bit longer and give them more time to regroup before traveling to face rival Minnesota State University – Mankato on Saturday, Sept. 28.