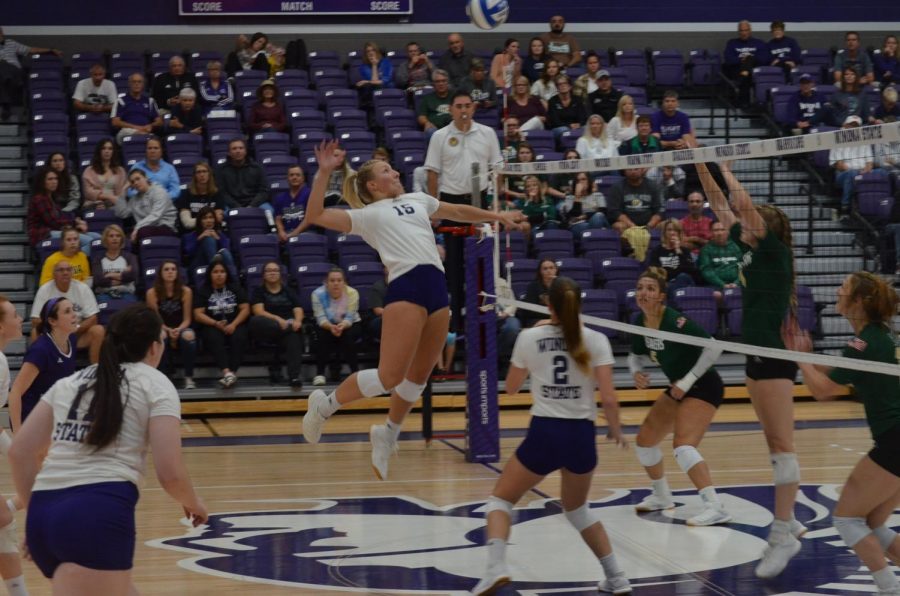 Sophomore middle blocker Madison Rizner spikes the ball against the Bemidji State Beavers on Friday, Sept. 27 in McCown Gymnasium. The Warriors won back-to-back games over the weekend, scoring 3-1 against Bemidji and 3-0 against the University of Minnesota Crookston.

Winona State University’s volleyball team got right back to business this weekend  handling Bemidji State 3-1 and routed the University of Minnesota Crookston 3-0.

With the two wins the Warriors now sit at 2-2 in the NSIC.

Sophomore Madison Rizner weighed in on the Warriors quick turnaround and how the narrow defeats the previous weekend affected the team.

Rizner explained how playing two ranked teams was eye-opening for them and showed how truly competitive they were in the conference.

“Although both resulted in loses and that’s hard to take coming from being 8-0, it made us focus on the little things and like teammate Hannah said put a fire in our bellies,” Rizner said.

There were a lot of positive takeaways from the losses though.

Rizner said it showed how close they were to beating these ranked teams and gave them the motivation to get better.

“We competed at a high level and fell short to minuscule errors,” Rizner said. “These things are easily fixable through practice and team play. This also motivates us to keep on track with our team goals.”

She said she believed they were at mid-season form, but not at their full potential.

“We have put so much hard work and effort into practice and the gym, that I feel confident in saying that we have not showed our best volleyball yet, and I’m anxious to see where that takes us,” Rizner said.

It may not have been their best game, but it sure was enough to get the job done, as things got off to a hot start for this team winning the first two sets on Friday against Bemidji, 25-19 and 25-13.

After falling in the third set 19-25, the Warriors battled 25-23 to wrap things up in the fourth set.

In the overall series, the Warriors have won 14 of the 15 matchups, with the only loss coming back in 2009.

The Warriors have won 11 of the 12 matches against Crookston, with the only loss coming back in 2013.

These were the first two home games of the season, and Rizner and the team are excited about finally not having to travel.

“Traveling three weeks in-a-row is mentally and physically challenging, and adding on to the stress of traveling, is missing numerous classes every week,” Rizner said.

The Warriors now sit at 10-2 and are prepared for more ranked match ups against No. 19 University of Sioux Falls on Oct. 4, and No. 9 Southwest Minnesota State University on Oct. 5.

Both of these matchups are back on the road before the Warriors will have a home stand stretching from Oct. 11-15.

“We have been working hard all week in practice to perform at a level that fans haven’t seen in previous years before. Our fans should expect a high intensity vocalized games that makes them proud to be Warriors,” Rizner said.