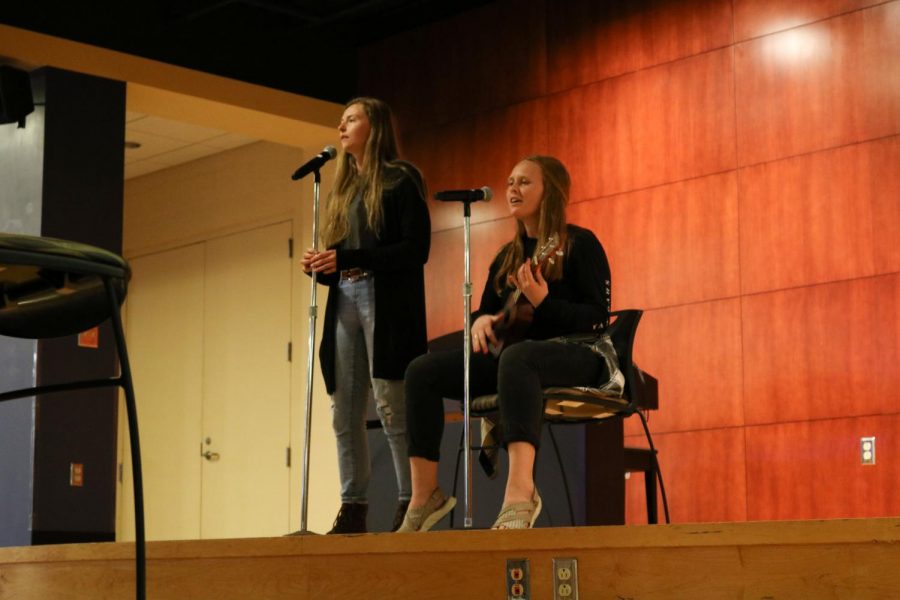 Winona State University is a place students can not only learn, but also show off their talent.

In preparation for the annual Winona’s Got Talent, the homecoming committee is trying something new this year: a preliminary show.

In the past, the talent show was only one night and anyone who signed up for the show was able to perform the first night of homecoming, along with coronation.

This year, there was a preliminary show on Sunday, Sept. 29, where individuals and a group performed, and the crowd got to vote for their top three favorites to move onto the final show.

For the preliminary show, three groups did not show up, so the two individuals and the one group all got to move to the final show.

The first performance that is moving onto the final show includes Brianna Stenvick, a junior majoring in early childhood and elementary education, who will sing in English and Japanese.

Stenvick considers herself an “anime nerd” and had been wanting to perform this song for a while since it is her favorite.

The final performance is the duo of Emalee Smith, a senior elementary education major, singing and playing ukulele; and Kimberly Olson, a senior movement science major, will be singing.

Smith took a class over the summer where she had to learn to play the ukulele, and has been playing ever since. Olson has been singing since she can remember.

The show was hosted by Megan Weilandt, parade chair for the homecoming committee and senior majoring in mass communication- advertising.

Throughout the show, Weilandt announced the performers and what kind of performance they were going to do, along with announcing other events the committee is putting on during the week of homecoming.

“The talent show is always run with coronation so now that we will have less a,cts at the show, we can do more with coronation,” Borucki said. “It will let us ask more questions and spend more time with the court than we have been able to do in the past.”

Not only does the talent show benefit the homecoming court, but also benefits the students performing and students who want to watch.

“In years past people come to just the homecoming committee to audition for the show but we realized that there’s just so much great talent that we wanted to be able to show everyone and not just have to pick a couple of groups for everyone to see but now anyone who wants can see all the talent Winona State has to offer,” Borucki said.

The talent show does more than just show off talents, it brings all of Winona State together to watch and support one another.

Mackenzie Churchward, student chair of Homecoming and senior majoring in nursing, explained the importance of the talent show.

“It gives students a way to show their school spirit and a place to show off some talents because on a normal day you’re not going to want to just go and perform in front of everyone, but if it’s for homecoming week and the talent show then people are more willing to get up and perform,” Churchward said.

The talent show kicks off Homecoming on Sunday Oct. 6 at 7 p.m. in the Harriet Johnson auditorium starting the festivities for the week.