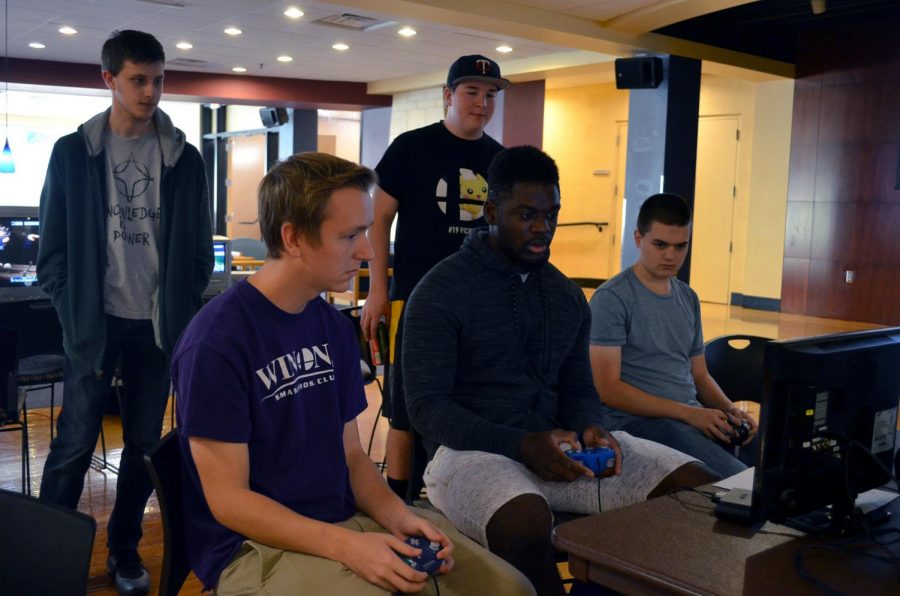 A new era of competition is hitting society, but it’s not as physical as you think.

The E-sports community has started to boom throughout the past few years, and it is no surprise it has found a place here at Winona State University.

The Super Smash Bros. Club was officially founded in 2018, but according to founder and co-president Nick Austad, the community has been here for longer than that.

“Winona State has had an active group of competitive Smash Brothers players since I can remember, Justin and I started running tournaments our sophomore year after the person who used to run them got too busy to maintain the schedule of constant meetings,” Austad said.

Every Friday the club meets together to play Super Smash Bros. and hang out and get to know everyone who attends.

“This is a great opportunity to get some tournament practice in or just play with all the items on and mess around,” Austad said. “Whenever there is a major tournament that is being streamed online, we also invite anyone in the club to come and join our watch party and eat free pizza to watch pro players.”

E-sports are usually hosted within multi-player games, and players can stream their performance through a few different streaming platforms, the most common one being Twitch for E-sports.

Justin Rogers, the other co-president of the club, discussed how there was not a certain skill level that players needed to have to join the club.

“Smash Bros. is designed to be a very accessible fighting game, and we like to run our club to be just as successful,” Rogers said.  “While it is true that we formed the club to focus on the competitive side of Smash Bros., it was also to share our love of the franchise with the university.”

The weekly meetings are a time to practice for the competitive tournaments that the club hosts 2-3 times a semester.

These tournaments, like the one they hosted on Saturday, Sept. 28 in the Student Activity Center, are free to all students.

“While we would love everyone to come experience the competitive side of Smash, it’s inevitable that tournaments tend to scare off people, which we are always trying to fix,” Rogers said.

According to the co-presidents, there is no need for any background or experience in any sort of video game to join the club. The goal is to make it as open and as welcoming to anyone who is interested in joining.

The best part about the group, according to Austad, is the bonding experience you get between other players.

“Although there is a competitive side to the club, a large portion of our club are people who grew up playing the game and just love to duke it out with their favorite characters and have a good time,” Austad said.

While e-sports may seem like a small community, the interest in the community has grown immensely over the past few years.

“E-sports is a booming industry right now and the time is now to be a part of it. Being a part of an E-sports community opens a lot of doors for fun opportunities that are more welcoming to a broad group of people,” Austad said.