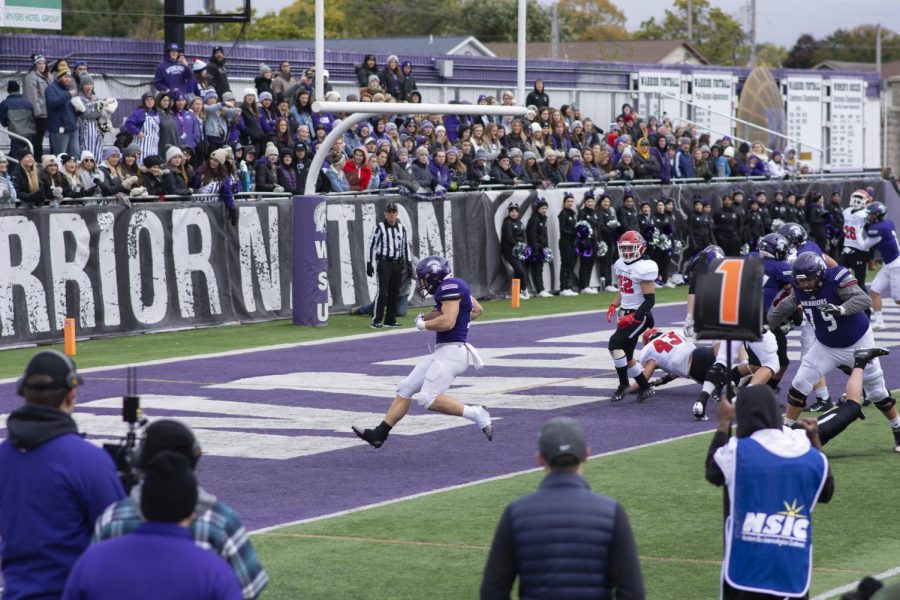 Landon Jacobson scores a touchdown in the second quarter with an unexpected one-yard run. The Warriors beat the Minot State Beavers 49-3 at the Altra Federal Credit Union Stadium on Sunday, Oct. 13.

Throughout the week, the university provided plenty of opportunities to engage and have fun celebrating the occasion.

To create excitement for homecoming early in the week, students were able to create their own Winona State pillow.

During the ceremony, the finalists from the talent show were judged by the audience and were eligible to win cash prizes.

Tracy Rahim, the associate director of student activities & leadership, was impressed by the performances.

“I thought they were very talented students,” Rahim said. 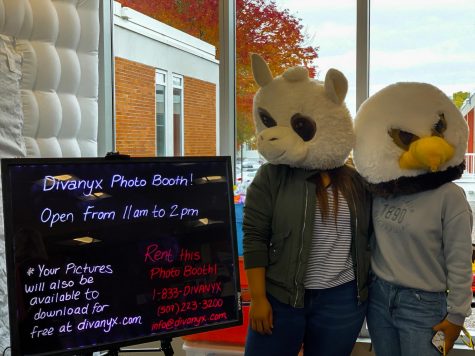 Mohammed IslamLeft to right: Arina Maharjan and Samina Sherchan, international students at Winona State, stand by the photo booth at the Club Fair on Friday, Oct. 11 in Kryzsko Commons.

With Monday, Oct. 7 also being the beginning of midterm week, study kits were handed out, as well as a yoga activity being hosted outside Somsen Hall, with about 40 students attending.

On Wednesday, homecoming royalty handed out free slushies to about 500 people. That evening, “Yesterday” was screened on the videoboard at the football field.

Thursday was the College of Business Alumni Engagement Day, where business alum engaged with current students and faculty in a variety of activities and shared professional experiences.

Friday, there was a club fair and pep fest, both of which were moved inside due to weather, which included President Scott Olson serving as a speaker. 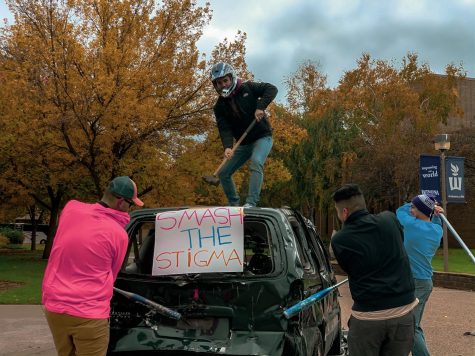 Mohammed IslamMembers of Sigma Tau Gamma fraternity host their annual “Smash The Stigma” car smash philanthropy on Friday, Oct. 11. Sig Tau was one of many clubs to host events during the week of Homecoming.

Friday night ended with a Warrior networking event where students could network with alumni.

The entirety of Homecoming week culminated into the events held Saturday morning at Winona State, beginning with the Warrior Waddle 5k.

The Homecoming parade was next on Saturday’s agenda, bringing both university and community members to line down Huff Street, and was immediately followed by the Homecoming Warrior Game Day Experience, which ran until the Winona State volleyball game against Augustana University.

The Warrior football game was moved to Sunday due to inclement weather for Minot State University, who were traveling from North Dakota. 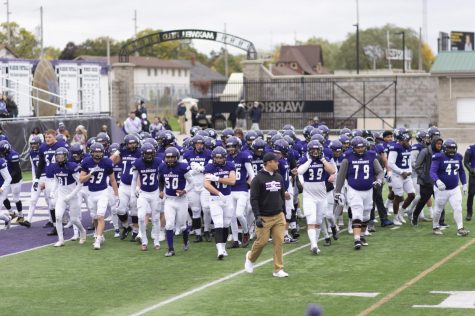 Overall, homecoming was affected by the low temperatures but there was still a show to go on and Winona State made the best of it.

One of the final events of the week was the football game, where the Warriors won in dominating fashion against Minot State University, 49-3.

Winona State was able to control all three phases of the game.

While the game taking place during homecoming could be viewed as one of the biggest games of the year, junior quarterback Owen Burke did not expect to prepare differently.

“With that being said, we understand how special this week is and how important this game is,” Burke said.

This setup a 27-yard touchdown pass from Burke to Balliu to take the early lead.

The Warrior defense also got started by making a statement, getting a turnover after senior defensive back Romario Gayle got an interception.

Five plays later, junior Sam Santiago-Lloyd would run in a 15-yard touchdown to extend the lead to 14.

After a punt by Minot State the Warriors would grind out another drive on the ground setup by runs by Santiago-Lloyd.

Junior running back Landon Jacobson finished the job by punching it in for the touchdown.

The Beavers would finally respond with a field goal, but that’s all the Warriors defense would allow all game.

Winona State’s offensive unit also did a good job of killing any momentum Minot State had, while Santiago-Lloyd running in another score making it 28-3 at half.

Winona State continued its dominance in the second half, where they forced another turnover when junior Jack De Groot recovered a fumble.

A big catch and run from Santiago-Lloyd led to another Balliu touchdown catch.

The Warriors got back-to-back touchdowns on the next offensive possessions, including a 49-yard touchdown pass by senior backup quarterback John Rumpza.

Neither team would score in the remainder of the game.

Santiago-Lloyd led the team in rushing with 98 yards on 14 carries for two touchdowns.

The defense’s dominance in only allowing three points was especially noteworthy despite missing key veteran starters in juniors Isaiah Hall and Devin Moore.

They were led in tackles by junior defensive back Richard Azunna with eight.

Next week, the Warriors will go back on the road to face Bemidji State University, kickoff will at 1 p.m. on Saturday, Oct 19. 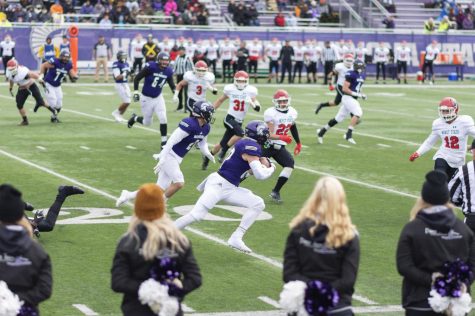 Lydia VelishekWide receiver Ethan Wittenburg rushes the ball downfield amidst a play against the Minot State Beavers for the 2019 Homecoming game. The game was delayed until Sunday, Oct. 13 due to weather.