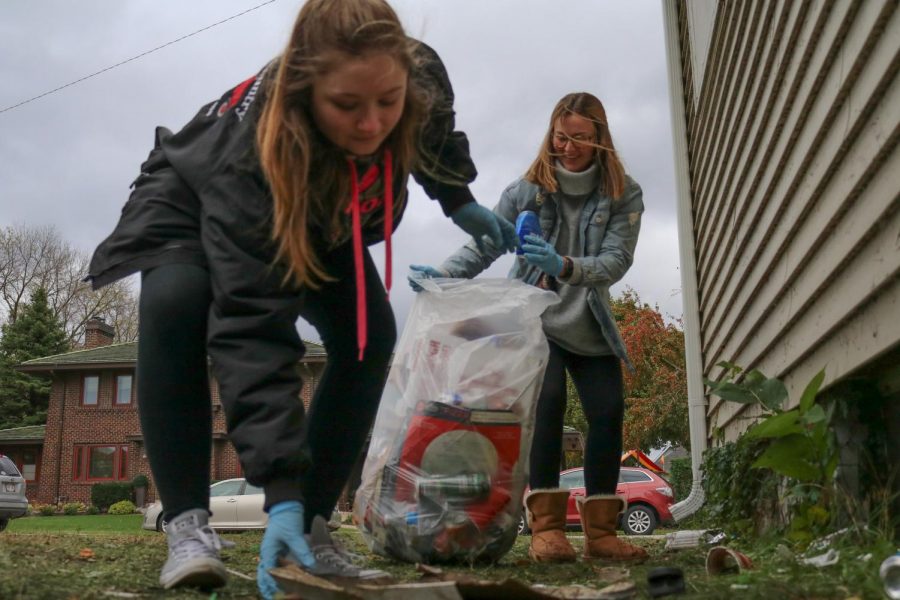 Winona State University students Jordyn Stasiak (left) and Aly Tracey (right) pick up trash during the Winona State Homecoming Clean Sweep, a post-homecoming initiative to clean up the streets surrounding campus. Stasiak and Tracey volunteered with The National Society of Collegiate Scholars, an honor society in which they both are active members.

Kendra Weber, director of student and community engagement, said the goal of this event is to bring the community back to how it was before homecoming.

Those participating met at the gazebo in the middle of campus where supplies such as garbage bags and t-shirts were passed out to the volunteers.

Groups split off, going around campus and throughout the city picking up trash, most of the trash being there before homecoming.

The volunteers were allowed to drop off bags of trash on specific streets. These trash bags were then picked up by the City of Winona’s sanitation workers.

This event is highly encouraged to all students, but what makes up the biggest number of participants in the sweep are clubs.

UPAC, Delta Sigma Pi (DSP), Circle K, Student Senate and others all participated on Sunday to help bring the community back to what it was.

Vice President of Community Service for DSP, Elizabeth Schamber, spoke out on the fraternity’s involvement with the clean sweep.

Prior to this year, DSP has not participated in the clean sweep.

“I thought that this would be a good way for the fraternity to get involved with other organizations and the community,” Schamber said.

Weber started this event six years ago when she first arrived at Winona State. She said it is important, to her, for the campus and community to have a good relationship.

As students work their way through the campus and community, they have adopted silly traditions to help pass the time, ‘Who can find the weirdest thing?’ being one of those traditions.

During the entire sweep participants worked their way to the VFW in town. At the end of the sweep snacks and beverages were provided as a thank you.

With this event in the back of the community’s head, it helps a lot when Winona State and the community work together. Especially during homecoming everyone agreed that they want the students to have a fun time as long as they are conducting themselves in respectable manners.