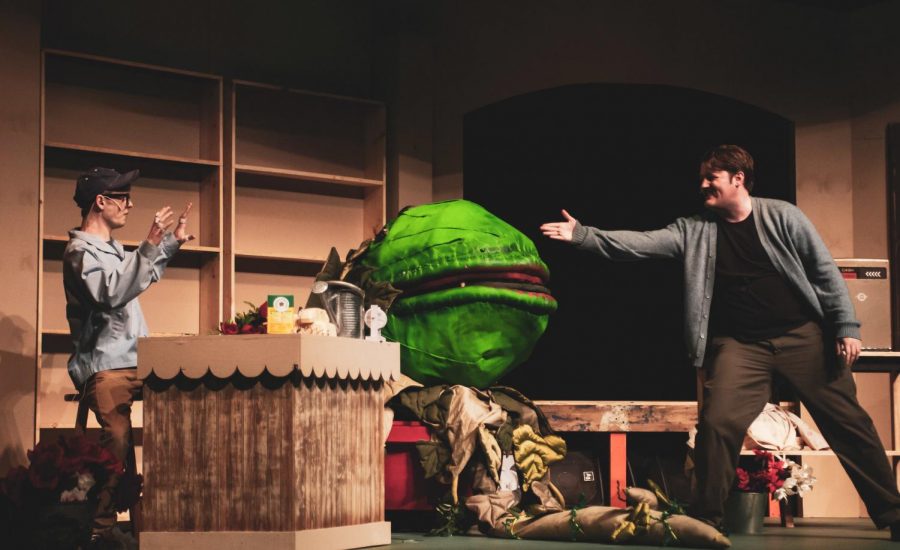 Tristen Weldon and Sam Scherrer act out a scene from the fall musical “Little Shop of Horrors” during a dress rehearsal on Thursday, Oct. 17 in the Robert A. DuFresne Performing Arts Center. Auditions began the first week of fall semester and casting was decided shortly after, the musical will run Oct. 23-26.

Winona State University’s theatre and dance program are bringing a whole new type of terror to campus… The terror of a man-eating plant.

The theatre department will be putting on a production of “Little Shop of Horrors,” opening on Wednesday, Oct. 23 and running through Saturday, Oct. 26.

This terrifying yet humorous musical has been around for multiple decades, putting audiences in a trance as they watch a tiny, harmless potted plant turn into a human killing machine.

Heather Williams-Willams, director of the fall musical, spoke on how it was decided that “Little Shop of Horrors” would come to Winona State.

“When we consider our season, we take into consideration a lot of different things. We want to do something for our majors and minors, and something that is good for all students, since auditions are open to everyone,” Williams-Williams said. “We also like to kick off with something fun and gets people into the theatre.”

Last year, Winona State’s first production of the year was “Rocky Horror Picture Show,” which brought in a large amount of students due to its popularity as a musical.

Auditions for “Little Shop of Horrors” took place within the first week of school, with theatre majors and minors being asked to prepare a monologue, and students outside the major having to sing and cold read a few lines from the script. Rehearsals started the week after, and the cast and crew have been working nonstop to get ready for opening night.

“‘Little shop of Horrors’ is a show near and dear to my heart,” Williams-Williams said. “This is my third experience with the production in different venues and I think the show is quirky and the characters are fun, it also gives actors a lot to play with because it’s not realistic.” 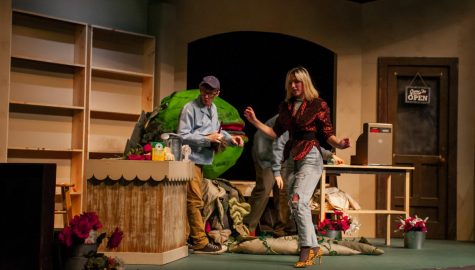 Mohammed IslamTristen Weldon and Kaitlyn Johnson portray the lead rolls of “Seymour” and “Audrey” during a dress rehearsal of the fall musical “Little Shop of Horrors” on Thursday, Oct. 17.

The story involves Seymour, a plant loving kid who during a total eclipse of the sun finds an unusual plant that he names Audrey II, after the coworker he is in love with.

The rapid growing plant attracts business for the flower shop, but things quickly down spiral as Audrey II becomes out of control.

Noah Nelson, the puppeteer for Audrey II, mentioned how the show has helped him expand his work in the theatre department. 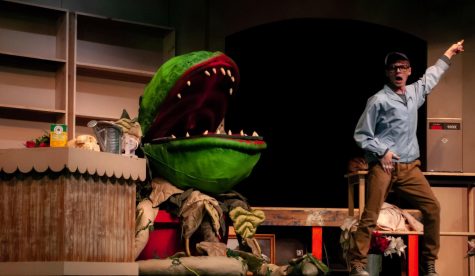 “When I initially auditioned but wasn’t cast, the director, who I’ve worked with on three previous productions, suggested I do the puppeteering for Audrey II, and I figured this was a great opportunity for me to try something new and acquire a new skill that could come in handy in the future,” Nelson said.

Rehearsals for the production ran every night from 6– 9 p.m., meaning a lot of time for the cast to come together and bond with one another.

“Everyone in the cast is very close. Many of us have been in productions together before while we also have some who have never done a production here joining us,” Nelson said. You can always find a couple of us hanging out in the Green Room in between classes chatting. We also like to hang out on the weekends sometimes, and a few of us recently went to Viterbo University to see our choreographer perform in their production of ‘Into the Woods.’”

Williams-Williams also spoke of how the cast has been awesome at working with each other and playing off their acting choices.

“The cast has been absolutely awesome. The majority of the cast are majors all across the board, from all levels of students ranging from first-year to senior,” Williams-Williams said. “They work so hard.”

The theatre department hired a choreographer from Viterbo University, a student majoring in choreography and dance. Through this opportunity, she has been able to gain experience into what she will be doing after she graduates from Viterbo.

“She’s really challenged them physically with the dances for the show. The cast has been working so hard on perfecting these dances,” Williams-Williams said.

Every night before rehearsals start, Williams-Williams takes a step back from her directing role and allows students to run their warm-ups by themselves, allowing them to bond with one another and feel a sense of leadership within their rehearsals.

While rehearsals sound strict and tight run, that is far beyond the case.

“My favorite memory from this production was when our director had everyone in the cast walk around the space as their character and I had to try to figure out how Audrey II would walk if it had legs,” Nelson said. “The result was very amusing for not only myself but also my fellow cast members and the director.”

The week leading up to opening night was tech and dress rehearsals, which according to Williams-Williams, brought in a new element every night.

“We add costumes the Sunday before opening, and every day we have a new piece of the set that is being added,” Williams-Williams said. “We are still working on painting a few set pieces and making sure everything is together, but I am very excited to see where the show is by Wednesday night.”

Nelson also spoke on how things have improved over time with rehearsals.

“I think the show is in pretty good shape right now, but we still have a lot of work to do before opening night and I know that it will continue to improve,” Nelson said. “Personally, I feel like I’ve gotten a lot better at syncing the puppet’s mouth movements up with Jacob, Audrey II’s voice, singing and speaking. As for the rest of the cast, I can only go by ear. I will say that some people struggled a lot in the beginning with not singing very loudly, but they have improved immensely in that regard.”

“I’m excited to see a lot of community members and students come and witness what we’ve been working on for two months,” Williams-Williams said. “It’s truly a magical and crazy show to watch.” 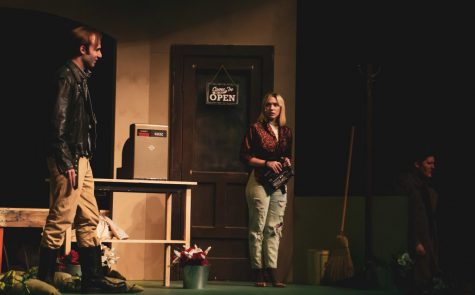 Mohammed IslamKaitlyn Johnson reherses a scene as “Audrey” during a dress rehearsal for Little Shop of Horror on Thursday, October 17 in the Vivian Fusillo Theatre.