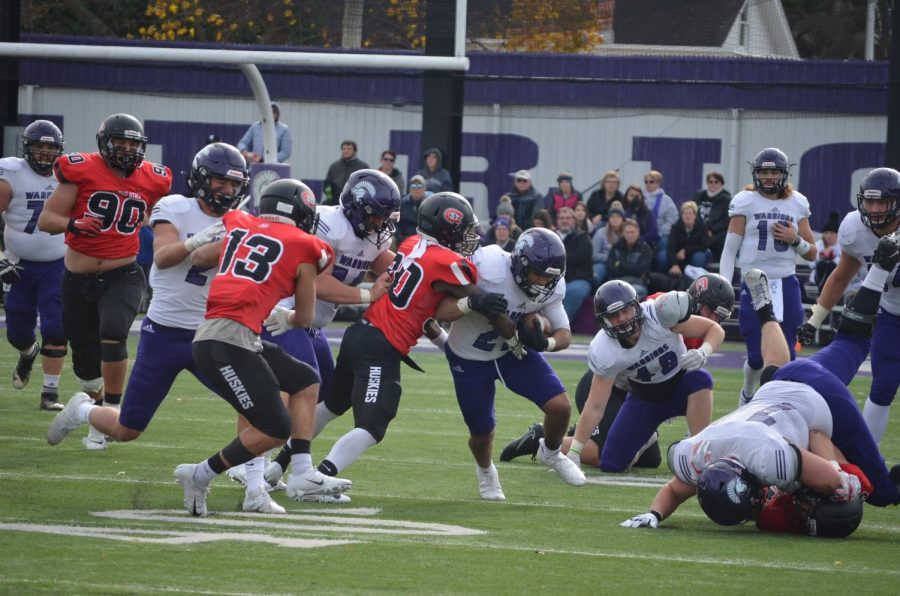 After dominating on the ground, the last few weeks, the Warriors turned to the passing attack against the Huskies.

“We think we can exploit their secondary this weekend and get the run game going,” Burke said.

The Warrior offense began the game deep in their own territory after holding call took back a return by junior defensive back Isaiah Hall.

Junior running back Sam Santiago-Lloyd got a spark going out of the gate with a 20-yard run.

The Huskies responded with a long drive of their own scoring on 11-yard pass to tie the game 7-7.

Burke and Santiago-Lloyd responded with another drive.

Burke hit four different receivers while Santiago-Lloyd rushed for 27 yards and punch it for the score to end the first quarter.

The Warrior defense forced a punt after a sack on third down.

After a Winona State punt the Huskies made the best of their field position by getting a field goal the Warriors’ lead was at four.

On the next Huskies possession, the Warriors forced a turnover after an interception by second year linebacker Clay Schueffner.

The short field position set up another Burke to Balliu score.

Schueffner came up with another pick but it wouldn’t add to points as Paul Ortiz missed a 48-yard field goal at the end of the half.

Both teams traded punts to begin the second half.

The Warriors’ special teams made one of the highlight plays of the game after junior linebacker Ryan Kusch blocked and recovered a punt for a touchdown.

After a three-and-out the Warriors extended the lead after another touchdown by Burke this time to first-year receiver Sawyer Maly making the score 35-10.

Senior Paul Ortiz added a field goal at the beginning of the fourth quarter to make the lead 38-10.

Saint Cloud added another touchdown before the Warriors ran out the clock.

The defense was able to wreak havoc by getting sacks, turnovers, blocking a punt and scoring a touchdown. They were led by Schueffner who got two picks and Isaiah Hall who led in tackles.

On offense Santiago-Lloyd added another 100-yard game to continue his hot streak.

Owen Burke had a bounce back game after a subpar game last week by adding three passing touchdowns and no interceptions.

The quarterback said moving forward the team is trying to go 1-0 each week and hoping that attitude will lead them to the playoffs.

Next week the Warriors will take their four-game win streak on the road as they face Southwest Minnesota State University in the battle for the sledge.