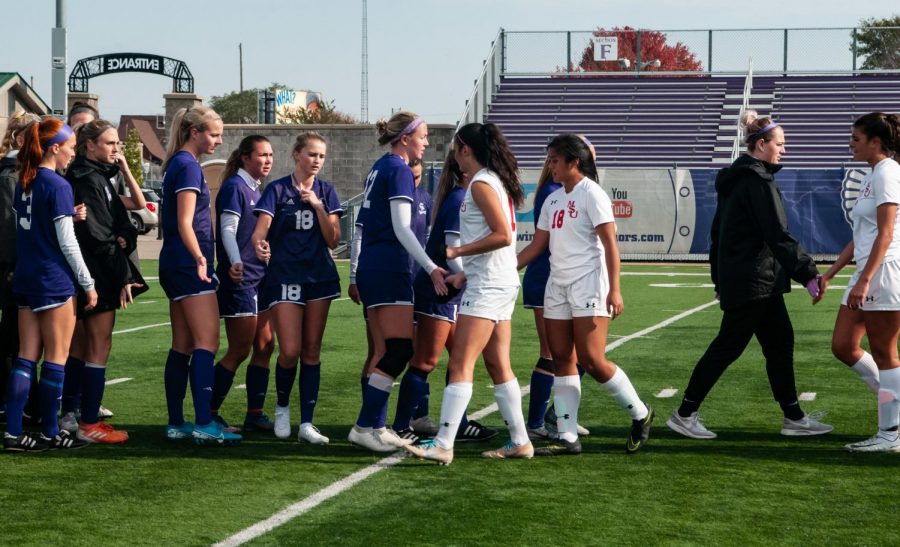 If we play well, we should be able to win these games, but it’s not going to be easy,”

That what senior forward Courntey Wincek said ahead of the week and that’s exactly what the Winona State University soccer team did this weekend, as they took care of business by handing the University of Mary a loss on Friday Oct. 25 and giving Minot State University a swift kick Sunday Oct. 27.

Senior forward Courtney Wiencek knew they had to bring their “A-game” against Mary as the Warriors narrowly defeated them 2-1.

The two Warriors goals were almost the same amount of goals Mary has allowed all season: three.

Riding high off the first victory of the weekend, the Warriors rolled into Sunday’s game with a lot of confidence, which they used well scoring early in the match up and keeping the peddle to the ground winning 3-0.

Topalis added her second goal of the weekend, along with first-year midfielder Jaida Wiege and junior midfielder Missy Greco adding two scores of their own.

Wiencek said the Warriors knew both teams had fast forwards and prepared all week on how to defend them and keep them off the board.

As the Warriors make their final push for playoffs, these two wins were the first step in the right direction, keeping them tied for the eighth and final playoff spot with the Southwest Minnesota State University Mustangs.

“We have a pretty good schedule and we are lucky that four out of our last five games are at home which helps us a lot, we just play better at home and we get to sleep in our own bed,” Wiencek said.  “But it’s definitely high stakes and we know that we have to win pretty much every single game if we want to make the playoffs.”

So, is there a difference in the teams energy going in to each game and each practice compared to at the start of the season?

“I think it’s just more focus, and there’s really no room for error,” Wiencek said. “At the beginning of the season you’re still trying to figure everything out, but now you should have everything down and know exactly what you’re supposed to do and at the right time.  So just putting everything into play and make sure we are taking care of business.”

Last year this Warriors team had to take a 10-hour bus ride to face these two teams and came up short in both match ups.

This year the roles were reversed, and the Warriors came out on top.

The Warriors next game is against the Southwest Minnesota State University Mustangs this Friday, Nov. 1.