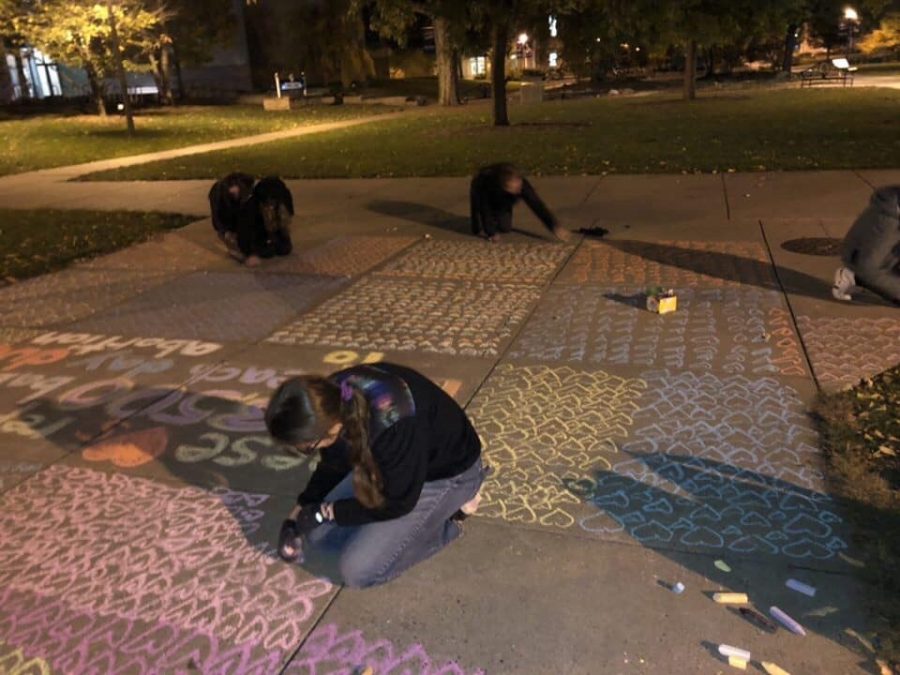 In a picture contributed by Warriors for Life, members of the pro-life club wrote messages about abortion and other issues surrounding it. The group chalked across campus the evening of Wednesday, Oct. 23.

Chalking has raised debate, controversy and confusion across the student population at Winona State University.

On Thursday, Oct. 24, Warriors for Life participated in National Pro-Life Chalk Day and followed other campuses across the United States in chalking pro-life messages across campus.

Sam Lauren, whose name has been changed for privacy, of the Warriors for Life club explained what their club does and why they chose to participate in National Pro-Life Chalk Day.

“We promote our mission statement that is ‘promoting a culture of life, from conception to natural death, through educating the public, our members and non-members alike,” Lauren said. “So, we did it as a way to address and inform others on our campus about the realities of what is going on in our country.”

Warriors for Life chose to promote and support their mission statement while also supporting a range of students on campus.

“It is a way to empower women, and we also made sure to chalk about other things, we had the domestic helpline number, the Suicide Prevention number, the pregnant need help number, the abortion crisis number and others to make sure to reach all aspects of life,” Lauren said.

Barry Peratt, advisor of Warriors for Life for more than 20 years, said the chalking has been done numerous times on campus, just not in recent years.

Peratt talked about his experience as the advisor of Warriors for Life and the adversity they have faced.

Many of their posters get torn down, their messages get erased and their voices are silenced, according to Peratt.

“There’s a bit of an orthodoxy here about which points of view can be expressed loudly,” Peratt said. 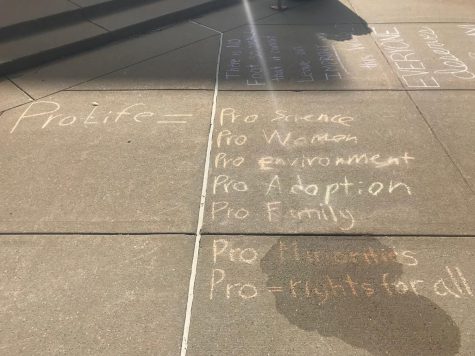 Nicole GirgenWarriors for Life chalked messages about abortion in hopes of sparking debate. Pictured above is one of the messages outside of Krueger Library arguing that pro-life is pro rights for all, the bottom had been partially erased with water as part of a counter protest.

Peratt said his colleague had mentioned that pro-choice messages had been written, and said those messages would probably not get erased, unlike the pro-life messages.

“I said, ‘no they won’t, because we don’t erase other people’s messages. They erase ours,’” Peratt said.

Student Lanie Johnson, whose name has also been changed for privacy, also has noticed this trend.

“As you can see, I’m a closeted pro-life person because I don’t want to be attacked for my opinions, you’re not going to see me go yelling at someone for what they believe because I’m not going to change them,” Johnson said.

Johnson noticed pro-choice students at Winona State are more likely to share their opinion and be open in class about their stance.

“Pro-life people just know not to do that here, because we’re scared,” Johnson said.

Jack Turner, whose name has also been changed for privacy, discussed how he feels about sharing his pro-life viewpoint.

“I personally am pro-life, but I also recognize I don’t have the right to tell [women] what to do with their bodies,” Turner said. “As a man on a female campus I don’t feel like I can share my opinion, being a white male from a middle-class family.”

While Turner has his opinions, he is hesitant to ever share them due to the tensions on campus.

“I’m very careful what I say because whatever I say can be attacked,” Turner said.

Much like Turner, Johnson also fears sharing their opinions due to the hostility of campus.

“I feel really strongly about [pro-life] and I wish I could put my name out there because I wish I could be more upfront about it, but being on this campus makes me scared to,” Johnson said.

Many students reacted to the chalkings and voiced their opposing opinions by chalking pro-choice messages, contacting faculty and staff at Winona State and posting videos of their reactions on social media. 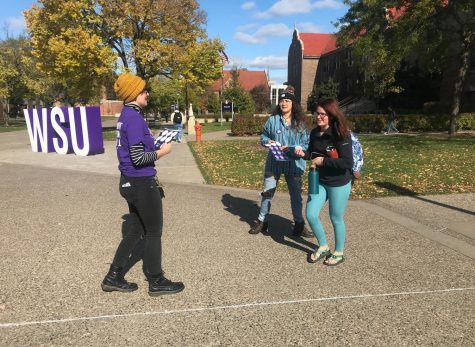 Nicole GirgenJunior Krissy Smith-Szymaniak and senior Alejandra Torres handed out buttons and stickers for NARAL Pro-Choice Minnesota on Thursday, Oct. 24 as a counter protest to pro-life messages that had been chalked around campus the previous night.

Lauren Fischer, a senior individualized studies major with minors in adventure tourism and child advocacy, posted a video on Facebook voicing her opinions.

“I’m cool and tolerant of opposing opinions that’s more than okay,” Fischer said. “Be pro-choice, be pro-life, that’s going to forever be a very touchy subject, I’m just not trying to shove my view down someone’s throat, and I’m not trying to get someone else’s thrown down mine.”

Fischer reached out to Alex Kromminga, director of student conduct and citizenship to understand the university’s role in the chalking on campus.

“We are an agent of the state, and we cannot impede upon individuals First Amendment rights,” Kromminga said. “It’s very narrowed what we can do, and I want students to recognize, don’t always look to the university to make rules and policies.”

Kromminga stated that the university is a place of teaching, learning, and growing, and the chalking was an opportunity to do all three.

“We view everything as an educational opportunity, our concern is to step back and let students work on things as long as it doesn’t interfere with the overall function of the university,” Kromminga said.

Lori Mikl, director of affirmative action/equity and legal affairs at Winona State, clarified the chalking on campus was within the rules and guidelines of the on campus chalking policy.

Denise McDowell, vice president for enrollment management and student life, expressed her views on student’s freedom of speech on campus.

“Freedom of speech is a double-edged sword, it’s great to have it, but it doesn’t come without some responsibility,” McDowell said.

McDowell said many people do not prepare for opposition, people prepare to state their opinion, but end up under prepared for the counter.

Sophomore student Diana Zargarian, a nursing major, felt the university does not do enough regarding the ongoing pro-life, pro-choice debate even if they cannot do anything about the chalking on campus.

Zargarian sent President Olson an email expressing her concerns of the chalking on campus and the pro-life, pro-choice debate that has been happening far before the chalking started.

“I sent it because I’ve voiced my concern about this issue with other faculty members, and I’ve talked to them about it and they would always tell me, ‘oh yeah, we’ll talk to someone about this, it will definitely get this handled’ and they never would,” Zargarian said.

“I just want everyone to know that you can be pro-life for yourself, but you can be pro-choice for others too,” Zargarian said. “In the end if it’s not your body, you don’t get to decide.”

Many students wanted to share their support of women across campus and make sure the women on campus had a voice and had a support system behind them.

“I’m a big advocate for women,” Fischer said. “I’m always down to raise my fellow women up.”

Sydney Bennett, junior social work and Spanish major feared for the women and all other students that may have been hurt by the chalking on campus.

Bennett takes no side in the pro-life, pro-choice debate and said she can see and understand both sides but does not identify as either.

“I identify, not as pro-life or pro-choice, I identify more pro-situation,” Bennett said. 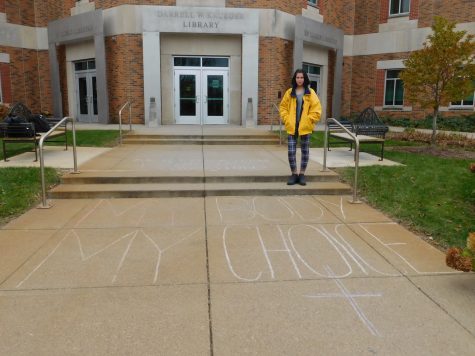 Shannon GalliartKelly, a junior social work major and women gender and sexuality studies minor, was one of many people who wrote pro-choice messages on campus the morning of Thursday, Oct. 24, after seeing pro-life messages that were written overnight.

Tamara Berg, a Women, Gender and Sexuality Studies professor at Winona State, advocated for a more productive discussion on the debate.

“I think a healthier, more productive discussion would have been better to do than sidewalk chalking that I think is offensive to a lot of students because some of the things that they wrote were just blatantly false or challenged, you know, sort of definitions that people hold dear,” Berg said.

Fischer also noted the troubles in the way the chalking debate steered away from discussion and left students unable to respond in a diplomatic discussion.

“If you’re going to go into a very difficult and sensitive topic you need to make sure that you’re up to date on how a diplomatic discussion needs to be held because with a topic like that, you could hurt people for sure and you’re also spreading a message if you aren’t factual with what you say and careful with the words you use, you’re progressing a negative connotation of your argument,” Fischer said.

Warriors for Life had hoped for discussions and wanted to create an open dialogue for the students at Winona State through the chalk messages.

“We accept all people and other opinions, we hoped that people would respond to us and talk back to us we, the reason to chalk is to have a good open dialogue discussion,” a Warriors for Life representative said.

Representatives of the Warriors for Life club stood by their chalkings to try and start conversations and encourage healthy dialogue among the campus.

“We were out during the day, as a way to protect what we had done, and to discuss with people who were actively trying to write back and we did have some very good conversation with a few people it was productive but unfortunately it happened after we witnessed them destroying what we had created,” a Warriors for Life representative said.

Throughout the day, students crossed out, erased and dumped water on many of the messages Warriors for Life had chalked. Students responded to the reactions of the chalkings and opposition.

Many students on campus were in support of the chalking and saw the beginnings of a conversation in the works.

“I came across on the way to class and I smiled, and I sent it to my family because it was just kind of nice to see,” Johnson said. “It was a little bit of a breath of fresh air.”

Johnson was not the only student to have a positive reaction to the initial chalk messages.

“I wasn’t expecting it, so I thought that was actually kind of cool that they did that because I know that’s a bold thing to do,” Turner said.

After the chalking raised debate, controversy and confusion on campus, there will never be a definitive right or wrong answer, only healthy conversation can reach the university closer to understanding.