Winona loses in a heartbreaker 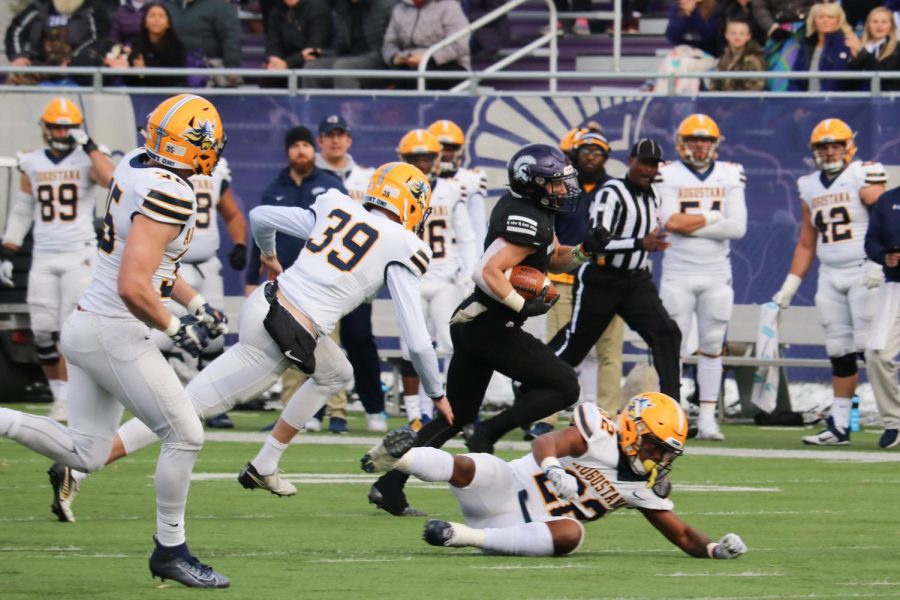 Winona State junior wide receiver Jake Balliu dodges Augustana players as he advances the football down the field at the Winona State vs. Augustana game on Saturday, Nov 9. Despite their efforts, the Warriors fell 25-26 to Augustana.

The playoff hopes of the Winona State University’s football team took a turn for the worst on Saturday after losing to Augustana University, 26-25.

It was a close battle that saw both teams’ starting quarterbacks leave the game with injuries and a controversial finish.

The afternoon started on a high note for Winona State, as they were able to end Augustana’s first offensive drive with an interception by sixth-year, Nick Pridgeon, that would be returned 85 yards for the game’s first touchdown.

The defense continued to make a strong statement early on, as they forced another three and out on the next drive. This set up a big punt return fifth-year Jake Balliu, who set the offense up at the Vikings’ 11.

The Warrior offense did not capitalize though, settling for a 30-yard field goal by senior Paul Ortiz, who extended the early to 10.

A chance at a touchdown would not be the only thing lost during this drive, as junior quarterback Owen Burke left the game following this possession with an injury.

The bad news continued for the Warriors. On the ensuing drive, the Vikings scored their first touchdown of the game.

Replacing Burke for the second week in a row was senior John Rumpza, who would not get a first down during his first three plays with offense. However, the Warriors quickly got the ball back, as their special teams unit forced a fumble on the following punt that was recovered by senior Romario Gayle.

Despite the opportunity, Winona State still could not find the endzone for a touchdown, settling for another Ortiz field goal.

Augustana responded on their following drive with a field goal of their own to cut the Warriors’ lead back to three.

After three consecutive drives of punts, the Vikings scored again, this time with another touchdown to take a four-point lead.

Another long drive by the Warriors resulted in another missed opportunity for a touchdown, again, settling for an Ortiz field goal to chop the lead down to one heading into halftime.

The second half started with a pair of plays that both the Vikings and Warriors would want to forget.

A ten-play drive ended Augustana’s first drive of the third quarter with a field goal that went wide left, resulting in no points for the Vikings.

The Warriors would then march down the field only to see a fourth down pass by Rumpza get picked-off by Augustana. This actually worked to Winona State’s advantage, as it gave the Vikings worse field possession than if the pass was just incomplete.

Field possession immediately became important as two plays, later a Pridegon-forced fumble, was recovered by Winona State on the Augustana’s 23.

Rumpza and co. were able to move the ball but the lack of touchdowns continued, with another drive ending in an Ortiz field goal, giving the lead back to the Warriors.

Augustana responded with long drive to start the fourth quarter and field goal to retake the lead.

After another pair of punts, the Warriors finally hit pay dirt, as Rumpza found Balliu on a 13-yard touchdown pass that gave Winona State the lead back with just over three minutes remaining.

“It felt good at the time,” Rumpza said.

However, a failed two-point conversion meant the Warriors would only have a five-point lead, something that proved to important moments later.

Augustana was not going to just die though, as they came up with a big fourth down conversion to keep their hopes alive.

Then came the controversy.

On what seemed to be a normal passing play with 48 seconds left, the Warriors’ defense forced Augustana’s backup quarterback out of the pocket.

The quarterback would then run seemingly passed the line of scrimmage before throwing the ball down field where he found a receiver who would get into the endzone.

A forward penalty was not called though, giving the Vikings the go-ahead touchdown with little time remaining.

The Warriors, stunned, sent out their offense to try and respond, but Rumpza would throw an interception on the first play of the drive.

Augustana’s offense killed the rest of the clock, effectively ending the game.

Following the game, head coach Tom Sawyer spoke highly of the team’s performance and remained critical of the penalties called against Winona State.

“The kids played really hard. We had a lot of big plays there and played kind of scattered. It was tough,” Sawyer said. “We played behind the chains a lot with a lot of penalties for some reason, and that hurts you, especially when you’re inside the 10-yard line and get a couple penalties.”

Rumpza, in relief role, ended the day 17 for 31 on passing attempts for 182 yards, one touchdown and two interceptions.

“I will just always do whatever it takes to win for this team and today we didn’t get it done,” Rumpza said. “I gave them everything I have, and they gave me everything they had today too. Just wasn’t quite enough.”

For Rumpza, it was not just the playoff implications that made this game emotional for him.

The day dubbed as “Senior Day” honored the players that were playing their last home game, this included Rumpza.

With a glimmer of hope remaining for their playoff dreams, Winona State will finish the regular season next Saturday, Nov. 16,