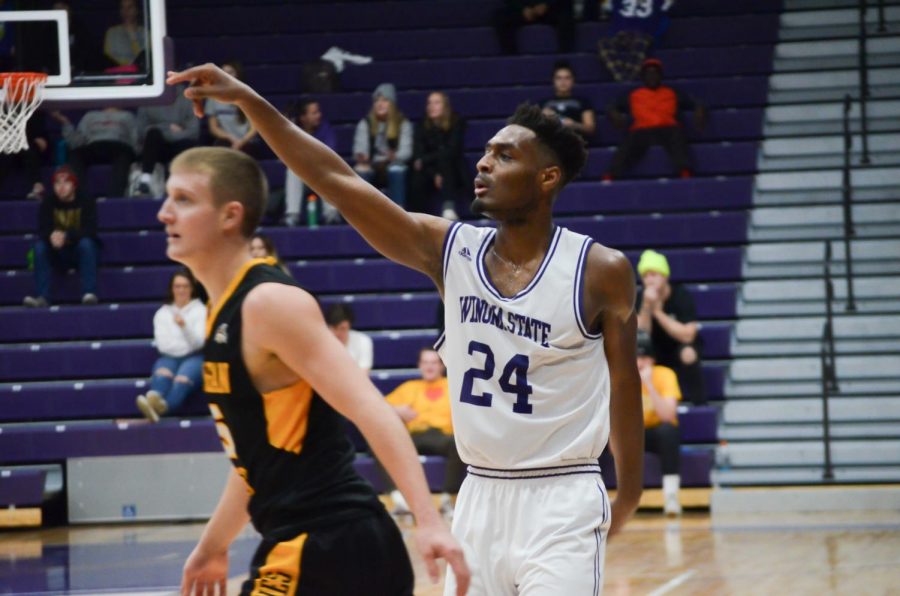 Kevion Taylor, a junior for the Warriors, watches to see if his shot makes it in the net during a game last Sunday against Michigan Tech, earning their first win of the year with a final score of 62-59.

Coming off a loss to Clarke University (70-73), the Warriors looked towards redemption for their season.

Junior guard, Dalante Peyton touched on what needed to be worked on going into the Michigan Tech game.

“One of the changes we saw from the Clark University game from watching film this past week was the amount of shots we took from the arch and the minimum amount of post presence we had, whether that’s getting to the paint or making plays in the paint or just scoring in the lane itself,” Peyton said. “That’s something we want to carry over and build on if we want to be able to expand our post presence to complement our three-point shooting.”

In the game against Michigan Tech, what needed to be changed, was changed.

Sophomore guard, Luke Martens went five for five within the arc while still going one for two from downtown.

In the 62-59 win, Winona State pulled away with a nine-point lead going into the second half.

Michigan Tech started their campaign back outscoring the Warriors 36-30 in the second half, but it was not enough.

Trading buckets in the final few minutes of the game, Winona was down by two with 37 seconds. when junior forward, Kevion Taylor hit the game winning three-pointer.

Taylor ended the game with 15 points, going five for 10 from beyond the arc.

Winona State had season-highs in field goal percentage (40%) and three-point percentage (43) in their victory against Michigan Tech.

Senior guard Caleb Wagner expressed how defense is a main priority for the team and a major key to the team bouncing back.

Within the win, the Warriors forced eight turnovers that boosted them to their victory, but they also committed 15 on the offensive side.

Winona State tackles their third game in the four-game homestand next Saturday, Nov. 23 at 3 p.m. against Bethany Lutheran College.