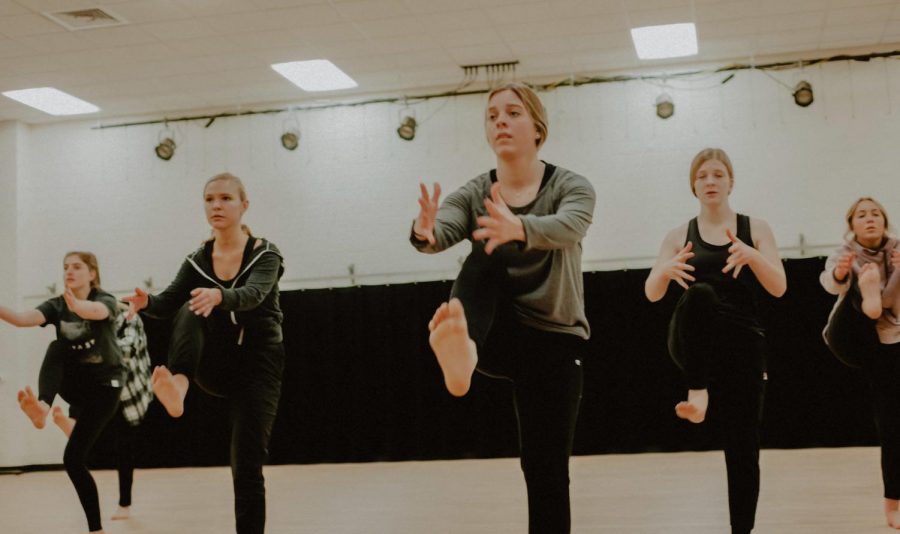 Dancescape has been a part of Winona State University’s creative history for 30 years, yet many students still have no idea just how much work goes into the behind-the-scenes portion of the performance.

Gretchen Cohenour, dance program director at Winona State University and artistic director of Dancescape for the last 30 years, has witnessed just how much work goes into the show. Dance piece proposal submissions opened up last March and were due the last week of April for the 2020 production.

“Student choreographers worked over the summer and as artistic director, I also worked to arrange guest artists to come and work with our students,” Cohenour said. “We have a final student choreography audition in November, which determines who’s finally in the show. From there, blooms all the rest of the production collaboration in terms of assigning lighting designers to each piece.”

Sophomore Jayde Grass, an elementary education major and a dance minor, is a dancer and choreographer for Dancescape. Grass estimated that she spends a minimum of ten hours a week, starting in early September, preparing for Dancescape.

“It’s all the little things,” Grass said. “What colors would go good together, what would look good fifty feet away in a dark room. I had to tweak my entire piece sitting in the Caribou in Somsen the other day because I had lost a dancer and had to rework things.”

“The show that you see is the months and months of work from the choreographers’ perspective and the shops, the various places that actually create the things that they’re wearing and holding,” Van Voorst said.

According to the directors, Dancescape is no small commitment, and every member of the production spends about a year preparing for the show, not just so it looks good, but so the production can speak in a way that represents the ideas everyone put into it.

“How the dance is at the beginning of the process is way different than what everyone else sees, and there’s so much that goes into talking to your dancers about the meaning of your piece and how the movement feels on them. For me, it’s so important for my dancers to feel comfortable with what they’re doing and if they don’t like it, I like for them to tell me so that we can change it,” Grass said. “It’s such a collaborative process and it’s ever changing right up to when that curtain opens.”

There is no unifying theme for Dancescape, so it opens up a massive playing field for all interested dancers and choreographers.

“There’s something for everyone from modern dance to more lyrical movement to hip hop to dances that really explore challenging social issues and issues that are relevant to our students now,” Cohenour said. “They’re incredible creative agents, these student choreographers.”

Grass talked about her piece and how different it is from many other pieces.

“There’s a very big contrast between some of the pieces. One is super upbeat and funky and then there’s my piece, which is a spoken word poem, and it talks a lot about mental health, and some struggles that we all go through pertaining to body image, self-esteem and self-love,” Grass said.

Tatum Reitter, a senior psychology major and dance and child advocacy minor, is a dancer, choreographer and the Dancescape publicity assistant.

“My piece is not what I thought it was going to be, but I love it,” Reitter said. “I picked out a piece of music that had a really zesty beat that I could groove to and I really loved it and so my piece is essentially its own planet, and my dancers are creatures, or inhabitants of that planet.”

“I want this piece to be fun and upbeat and for you to just feel like you can groove and connect with the music that flows throughout your body,” Reitter said. “So, it’s been a really fun process with all my dancers, they’re also open minded which has really helped.”

Dancing is the main component of Dancescape, but what the audience does not see is the time and commitment of the costume designers as well. To bring the entire show together, the dance has to have lights and costumes to match the theme.

“I think a lot of people forget about the other elements like the lighting design and the costumes because those are the two things that really interact the most with the choreography and the dancers,” Van Voorst said.

Costumes can be made, found, bought, or altered, so the job of many student employees in the costume shop is to make or alter costumes for Dancescape.

“We kind of honestly just do a little bit of everything,” Braun said. “But when it comes time for the actual show, we will do the laundry that people need cleaned, fix anything that was ripped during the show, just pretty much whatever the dancer needs to feel comfortable on stage and whatever we need to make sure they all look polished and clean.”

According to Van Voorst, Dancescape is constantly flowing, moving, and changing along with how the dancers and choreographers feel throughout the process.

“The student pieces have a lot of different feels to it, so each world of dance just has its own existence and I try really hard to work with them and figure out what that world is,” Van Voorst said. “Every show, every play, every dance, everything that we do sort of has its own universe so Dancescape is sort of like 14 little universes and 14 little directors.”

Reitter said she usually just tells the costume designers and light technicians that she fully trusts them and tells them to do what they feel is right. Many choreographers will leave the designing up to the costume shop and lighting technicians to let the piece come together with a little bit of help from everyone.

“It’s a multi-faceted team that really is interdisciplinary in terms of the whole university, Cohenour said. “Our College of Liberal Arts dean’s office has been so supportive in terms of the guest artist residences and yeah, we’ve got an amazing campus here.”