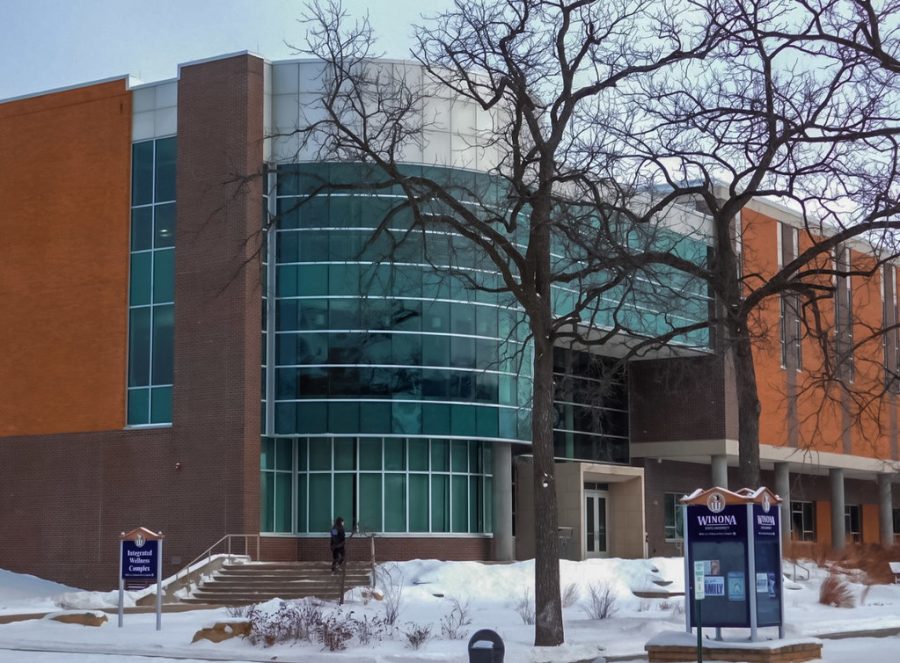 Key part of students’ new year’s plan includes getting healthier making the Fitness center in the Integrated Wellness Complex, a popular place for students throughout the year to work out and take fitness classes.

The Intergrated Wellness Complex (IWC), counseling services and library of Winona State University surged with activity during the first week back on campus as people began their resolution-fueled journey to self-improvement.

For library student manager Stephania Parrett, she sees the ebb and flow as a natural event at the beginning of each new semester.

“In the fall, students use the library more so as a place to hang out,” Parrett said. “The increase in activity for the library in the spring is more focused on academics and studying rather than socializing.”

With this Parrett mentioned that students, new and old, have gotten the hang of their schedules after the first semester and are now ready to get back to business, which includes utilizing the library as a place to meet for group projects, studying and taking advantage of other resources.

When asked about students and their resolutions to focus more on schooling, Parrett mentioned that the library isn’t always a natural fit for everyone.

“For some people, the library is the best environment to study and be successful,” Parrett said. “Ultimately, students have to acclimate to where their classes are and find the best spots for them to focus.”

Another key part of students’ new year’s plan includes sweating it up and getting healthier.

As a new fitness class instructor, junior Katie Adams shared her thoughts about resolutions associated with the gym.

“I believe change has to come because someone wants it to and not solely because the calendar flipped,” Adams said.

She said she retrained her thought process on ‘new year, new me’ in terms of getting active by thinking of resolutions as lifestyle changes. By doing this, she set herself up for more success, as she was able to recognize long-term benefits of the goal.

Adams teaches Tabata Tone, which she described as “20-second exercises followed by 10 seconds of rest” that engages arms, legs, full body and the core to upbeat music.

As a freshman at Winona State, Adams set a goal for herself to become a fitness instructor so she could positively impact others’ fitness journeys like a former instructor did for her.

While Adams is very goal-oriented, she sees the idea of resolutions in a less positive light, partly because people are too quick to make drastic changes.

“When we uproot all our constants, we’re thrown into confusion,” Adams said. “We try to maintain the goals but soon enough, old habits trickle back into our daily lives.”

Her year-round goal, which became heightened during the new year, is to help people establish their foundation level of fitness with her class’s motto being you can do anything for 20 seconds.

“I want everyone in my class to recognize that their goal isn’t the same as the next person because we’re all different.”

But between recommitting to academics and athletics, students also are making their mental health into a focus.

Kateri Johnson, the interim director for counseling services, mentioned that the new year is a great time for students to reevaluate prior goals.

The idea of strengthening mental health can be challenging though, because there isn’t always a direct way to measure progress.

Along with that, Johnson stressed that it is okay and normal for goals to fluctuate because ones associated with mental health are less cut and dried than fitness or studying-related goals.

“I believe the new year should be about making attainable goals and assessing all areas of the goal,” Johnson said.

This can include looking at the timeline for completing the goal, available support systems, potential obstacles and ways to reward yourself for the accomplishment.

Johnson also mentioned that the increase in counseling services is predicted more so by the semester and less by the coming of the new year.

“Awareness,” Johnson said, “is the ideal way to go about making resolutions or goals.”

The best person to know about you is you.” “Track moods and understand what reaching out for help looks like on an individual level.” Johnson said.

Johnson brought up a piece of advice for the year 2020 and suggested using 20 minutes a day to make mental health a priority.

As a final word about the connotations that new year’s has with resolution-making, Johnson poignantly said that “achieving goals, especially with mental health, is not about finding time but making time to be successful.”