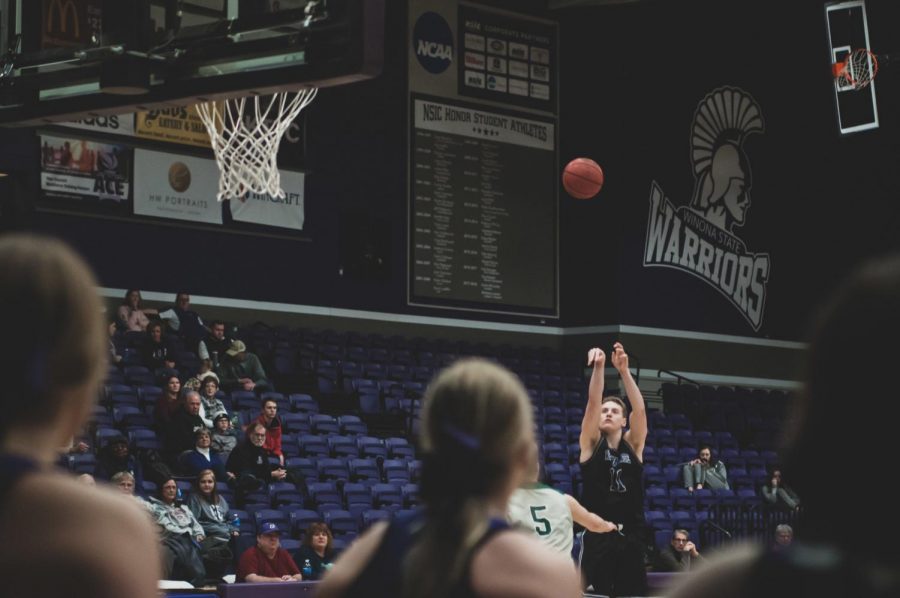 Winona State sophomore, Luke Martens looks to shoot a three-pointer in the second half of the game against Bemidji State. The warriors secured their win, scoring 82-74 on Saturday, Jan. 18 in McCown Gymnasium.

Going into the weekend home stand, the Winona State University men’s basketball team were 8-8 with a 5-5 against the Northern Sun Intercollegiate Conference (NSIC) with two upcoming matchups against conference rivals.

Before the game against University of Minnesota-Crookston, senior guard Caleb Wagner said it would be tough, especially since he had the task of guarding “Harrison Clearly, who can go for 40 on any given night,” Wagner said.

The Golden Eagles would begin the game with a 6-0 run before Wagner would get the Warriors on the board.

Winona State would take a 7-6 lead and then it would be a back and forth battle with both teams trading the lead.

The Warriors would finally hold a significant lead with 6:40 left in the first half when they got up 31-21, following a pair of free throws by junior Kevion Taylor.

Winona State would go on a 19-10 run to end the half up 50-31. The Warriors were able to get the lead because of their efficiency on offense and shooting 8/16 from behind the arc.

Defensively, the Warriors held the Golden Eagles to under 35% shooting from the field and under 25% from 3-point range.

In the second half it would be more of the same for the Warriors as the lead remained in double digits as they cruised to the 80-66 victory.

Wagner and Taylor led the way,  combining for 52 points. Taylor also led the team in rebounds with eight.

The Warriors would look to keep the momentum rolling on Saturday, Jan. 18 against Bemidji State. The game started out fast-paced with both teams going shot for shot.

After cutting the Beaver lead to one, the Warriors found themselves down 10 after a 9-0 run. The Warriors would respond and even the score at 23 following a bucket by sophomore guard Alec Rosner.

The team kept the same game plan as the day before by taking good shots and shooting over 40% from the arc.

The Beavers cut the lead to six early in the second half. The Beavers did not get closer as the Warriors ended up getting the 82-74 victory.

The Warriors were we once again led by Taylor and Wagner who both went over 20 points.

To keep this run going, Wagner said the team needs to play longer stretches of defense.

Wagner also said the Warriors need to be shooting over 50% from the field because “we get into stretches where we shoot 40% or 30% for a whole game, which isn’t good enough.”

The Warriors will continue their season next week in games against Southwest Minnesota State University and the University of Sioux Falls.