How does Winona State handle diversity around campus? 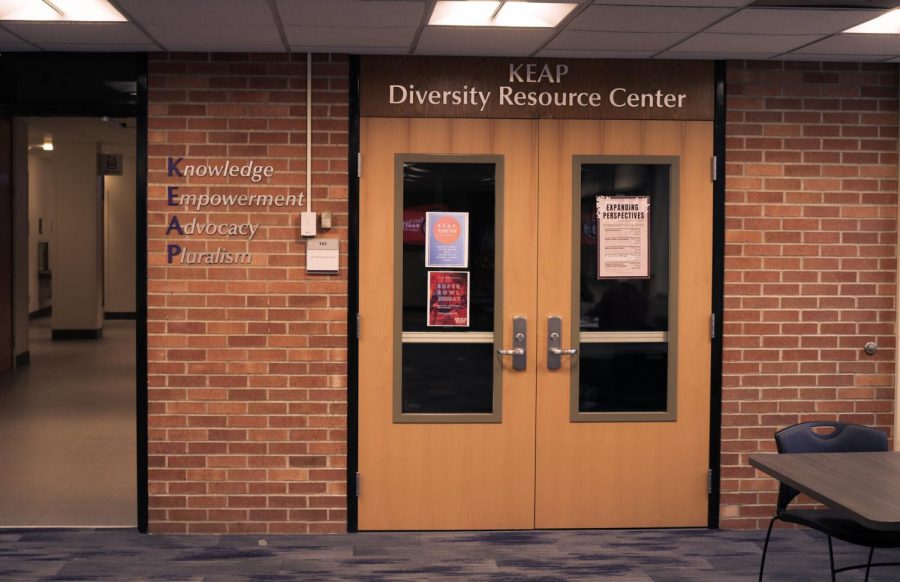 Winona State University’s KEAP Diversity Resource Center, works to create a safe space and an inclusive atmosphere for diverse persons, organizations and groups. Located in Kryzsko Commons, the KEAP Center is committed to cultural diversity and to prepare all members of the community for successful living in a global society.

As the United States grows more and more diverse in race, ethnicity, gender, sexuality, age and ability, higher institutions of learning are changing as well.

However, there are many remaining questions about how Winona State University is changing in their student and professor diversity.

According to Dr. Jonathan Locust, associate vice president of the Inclusion and Diversity office, diversity is so much more than just race or ethnicity, despite what many may believe.

“We look at a lot of different areas such as race, ethnicity, sexuality, gender identity, socio-economic status, veteran status and differing abilities,” Locust said. “We really look at diversity from a number of different perspectives.”

According to Dr. Eri Fujieda, director of Institutional Planning, Assessment, and Research at Winona State, the university has changed dramatically over the last ten years.

Fujieda stressed how important it was to put these diversity statistics into context, and even the Winona vs. Rochester campus differ in student diversity, despite being merely an hour away.

“There are many factors that go into how diverse this college is versus other colleges,” Fujieda said. “Diversity factors change based on region, type of universities, transfer or non-transfer campuses, state vs. private, two or four-year institutions, and the population around the school. We have to consider the context when we look at these numbers.”

Fujieda also explained how ten years is not a large window to look at, especially for this type of data.

While the racial and ethnic diversity may have changed significantly in the past ten years, the numbers of non-traditional undergraduate students have stayed around 10% over the decade. The percentage of first-generation college students decreased in all colleges at Winona State.

The Hispanic undergraduate student population has grown from 2% to 5%, making them the largest minority ethnic group on campus. Despite this, many Latinx students feel isolated at Winona State.

Mari Orrego, a junior advertising major and public relations minor, is the vice president of the Student Organization of Latina/o/x (S.O.L.), a club on campus that aims to reach out to as many Latinos as possible and create a home in an environment that can feel isolating.

She first went to the club with a group of friends from a Spanish class and found that she was not alone in wanting to bond with other people of color on campus.

“I thought college is supposed to be a time where you got to meet people from all sorts of walks of life,” Orrego said. “But when I got here, I noticed that was not the case and it felt isolating and I felt so out of place. As a minority, you kind of feel like that in this country, but in [Winona] it was so evident how much I stick out.”

For Orrego, S.O.L. helps to create a sense of home and community to hold on to in Winona, as it helps her bond with other Latinx students.

While Orrego understands that the quality of her education is the most important factor while attending a university, she does notice the lack of professors of color.

“There’s not many professors that look like me,” Orrego said. “Overall, what matters the most is that you know you’re getting a quality education. But sometimes, it sucks when I can tell that they have a limited world view.”

Despite this growth in student diversity, Orrego feels as though the cultural exposure and education of white professors on how to teach students of color can be improved.

“This one time, I was in a class where we were learning how to light faces, and the professor told people to not make me look too dark, too light, or too ‘ethnic’,” Orrego said. “I was shocked and everyone around me was very taken aback. I don’t think he meant to be hurtful, but it made [the situation] very weird and uncomfortable.”

Locust agreed with Orrego, stating that it would be better for the Winona community to have more professors from minority backgrounds.

“One of the things that is agreed upon in the community is that we need more faculty and staff of color and more faculty and staff from underrepresented backgrounds,” Locust said. “I know specifically that the IFO (Inter Faculty Organization) Faculty of Color caucus had made this a priority to focus on diversifying faculty of color. We also believed this was an issue in the Inclusive Excellence strategic plan.”

To mitigate the issue of the lack of faculty of color, Winona State hopes to soon create a resource for hiring committees which will introduce more diverse professors into the applicant pools. The jobs will be more easily posted in diverse areas and is predicted to bring in more professors of color in particular.

One thing being added is an LGBTQ+ form that freshman will fill out upon coming to Winona State to determine the number of students who are in that community. From there, resources can be more accurately allocated to assess and serve the needs of those students. There is also a budget for diversity clubs to request money to send students to particular conferences that pertain to their organization.

According to Locust, the data that will be collected will only help the university address the needs of students on campus. Even something as simple as an opportunity for a haircut close to home is significant.

“Last fall, we started bringing an African American barber on campus to cut our males of colors’ hair because so many of them were having to travel to Rochester or the cities for a haircut,” Locust said. “Whenever we have those appointments, it’s a full day and the barber will cut hair for 15 individuals. The schedule fills up quick, so we find that we have to add another week.”

Orrego cautions against empty promises of encouraging diversity without action following, however.

“We see a lot of events that pertain to people of color being put on and supported by the university, and that’s cool,” Orrego said. “But whether or not people show up to the events or it changed the views of the people that go here is debatable.”