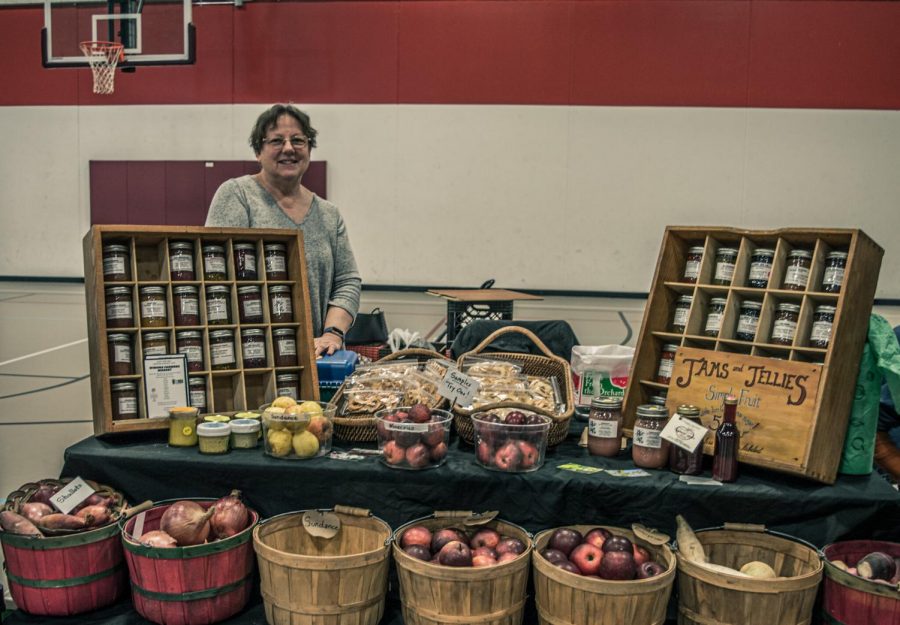 Esther Heyer has a booth at the Winona Farmers Market called Out on a Limb Orchard and Garden that has been selling fruit, vegetables, jams, jellies and more for the last 27 years. They donate their leftover products to the local churches to go to people in need.

Fresh, local and organic vegetables, plants, honey, apples and so much more can be found year-round at the Winona Farmers Market.

The Winter Farmers Market is located in the Winona East End Recreation Center Saturday mornings of every other week from 9 a.m.-12 p.m. during the winter season and holds any vendors who are interested in selling year-round.

While the summer Farmers Market fills Levee Park, the winter market only fills a small section of the recreation center’s gym. While it may be smaller than its summer counterpart, it is still abundant with a variety of sustainable and organic stands.

One of many businesses present is Infuzn Foods, ran by three friends originally from India who now live in southern Minnesota. They started their business about two years ago.

Sudharsan Lyengar, a co-owner of Infuzn Foods, said this is their first year at the Winona Farmers Market.

“This is my home, so I wanted to do it here,” Lyengar said. “We’re starting at the Winter Market and hopefully we’ll do it in the summer as well.”

“We wanted to bring our vegetarian style of food to the general public, not just to the Indian,” Lyengar said. “Most of our food is gluten free, most of it is also vegan, and we are all vegetarian all the time.

Infuzn Foods is ran mainly out of their Pine Island location, whereas many other booths are based in-home such as Britta McColl, who owns and runs White Country Loaf and Allison Bettin, who co-owns Tiny Spoons.

“I started baking bread probably 35 years ago for my family and I’ve slowly learned how to make sourdough bread and brought it to the farmers market,” McColl said. “I found out people would buy my bread, so I started making and selling more.”

The bakery McColl has is attached to her house, which led to some problems in production time before she added commercial ovens and started her flourishing business.

McColl plans on adding to her home bakery by adding a small picnic area to allow her shoppers to stop and enjoy the fresh bread they purchase.

She sells her bread not only at the Farmers Market, but also out of her home and at Bluff County Co-Op.

Much like McColl, Bettin also runs her small business out of her home. However, there have been many challenges arising in the production of her treats.

“The business has grown too much, and I can’t do it on my home anymore and we were just unable to expand into a brick and mortar,” Bettin said.

Bettin has to close the doors of Tiny Spoons as it has grown significantly over the years and has become too big for an in-home bakery.

“I’ve been doing this particular thing for three years, but as a mom, this has worked well for sure,” Bettin said.

While Bettin will not be working anymore Farmers Markets, she plans to keep attending as many as she can.

“We will still attend the markets–my kid loves them–and I really think that it’s important that we support these individuals who are out here, because I think we’re losing something. This kind of thing is starting to die out and the more we can support local makers or artists or create infrastructure so they are able to make those changes, the better they will all be,” Bettin said.

While Bettin and McColl have specific niches on what they sell, some vendors sell a wide variety of items.

Esther Heyer has a booth called Out on a Limb Orchard and Garden that has been selling fruit, vegetables, jams, jellies and more for the last 27 years.

“We started out small, but we’re kind of doing all the vegetables now from orchards, we go from apples to zucchini. We do a lot of salsas, jams, jellies and all things pickled,” Heyer said.

The business started with her husband who worked at different orchards around the area since he was a teenager. After starting with 400 trees, the business now has regulars and they have been able to learn and teach others while selling their products.

“I’ve learned so much from these customers’ recipes and how to use things too, but that was kind of the goal,” Heyer said, “And also, it’s nice to interact directly with people and explain your product and be able to learn from each other.”

Much like Heyer’s booth, Will and Maxine Mormann’s booth, Tapestry Gardens, has a wide variety of products to sell from potted succulents to fresh and organic vegetables.

The Mormann’s main focus is providing organic produce for their customers.

“Our Winona market is the best organic market there is around,” Mormann said. “It’s not the most profitable, but it’s the best people in Winona who care about being organic.”

The Mormann’s garden like a regular job and propagate items they buy or grow so they can sell it to the public.

“While you don’t make a lot, you’re making a little bit-you’re not going to get rich doing this,” Mormann said.

Much like Mornamm, Bettin also notices the lack of income.

“It’s really important, because it’s just a bunch of poor people who are trying to make some money.” Bettin said.

The farmers market is a place of community, friendship, sustainability and small business growth. For these vendors, the money is not what is most important.

Ruth Wills from Wills Wood Honey Farm also has a passion for her booth and the organic honey they offer.

Starting about 11 years ago with one beehive, they now have up to 20 hives.

“Our product is certified naturally grown, so we don’t use any chemicals with our bees, no high fructose corn syrup or anything that would be detrimental to humans or to the bees. We try to raise them as naturally as we can,” Wills said.

The Wills Wood Honey Farm produces honey, wax candles, balms, lotions, and many more products for both humans and animals.

“The goal is to bring a good product to people that is natural, that is good for them, that has all of the good amino acids in the honey for them,” Wills said. “It’s a good product that has nothing added to it and there’s nothing taken away for fresh and pure honey.”

The Winona Farmers Market offers a sustainable source of fresh produce, a wide selection of treats, and allows for students at Winona State to support the local small.