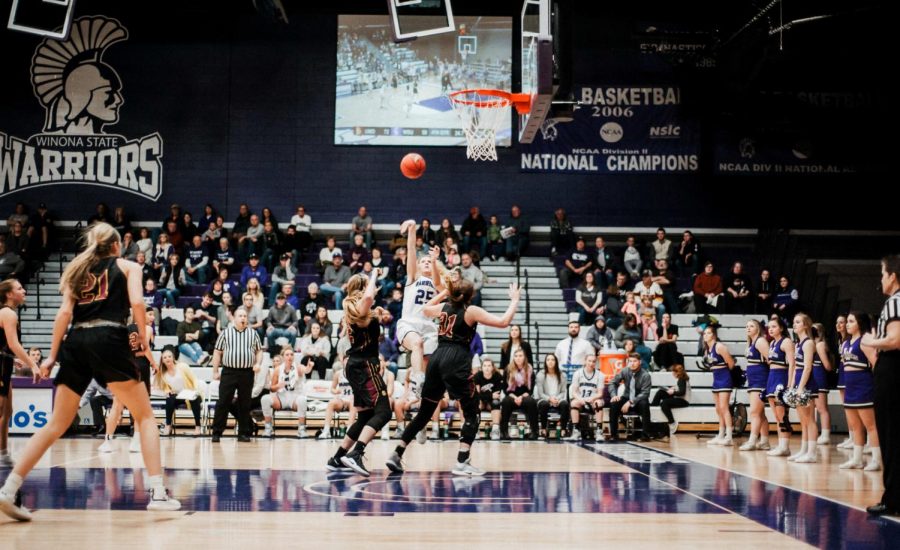 Sophomore, Sydney Lodermeier, looks for a basket on Friday’s game resulting in a successful two-pointer. The Warriors lost the game against University of Minnesota Duluth scoring 59-72.

Winona State University’s four-game winning streak was snapped by the University of Minnesota-Duluth Bulldogs Friday, Jan. 31 at home by a final score of 72-59.

Winona State falls to 14-5 (10-5 Northern Sun Intercollegiate Conference (NSIC) and remains second in the South Division while Duluth improves to 16-5 (13-2 NSIC) a top the North.

Juniors Taylor Hustad and Emma Fee combined for 33 points, with Hustad shooting 56.2% from the field and Fee collecting a team best of eight rebounds.

The Warriors shot 46.4% as a collective unit and the Bulldogs shot a little better with a 48.3% in the game.

Winona State had a strong start leading by six in the first quarter (18-12), but from there, the Bulldogs attacked.

The Bulldogs had their lead up to eight until Hustad drained a fade away jumper at the buzzer to cut the Winona State deficit to 37-31 at halftime.

Both teams were on fire in the second quarter, shooting a combined 61% from the field. The Bulldogs used 10 points off turnovers as the difference though to outscore the Warriors in the frame by seven points (26-19).

It was a Bulldog show from there on out. Duluth started an 11-point run to open a double-digit lead and never looked back.

In the second game of the two-game weekend, Winona State fell to St. Cloud State 68-49 in Winona.

The Warriors were held to just four field goals over the first two quarters and faced a 28-15 halftime deficit.

St. Cloud opened the game with a 10-0 run and kept the same energy throughout the game.

Winona State limited St. Cloud to only 13 points in the second quarter, which is the Huskies’ lowest scoring output of all four quarters on a 36% low shooting percentage.

Hustad drained a shot in the paint to cut the Winona State’s deficit to 15-10, but would be the only field goal made in the quarter by the Warriors as they would miss their next 18 attempts.

Winona State held St. Cloud to just one field goal as well over the first seven minutes of the quarter before the Huskies warmed up late and took a 13-point lead into halftime.

The Warriors broke out of their offensive slump in the third quarter with 18 points, outscoring their total from the first two frames, but was ultimately outscored by St. Cloud.

The Warriors finish their NSIC North slate next weekend away at Minot State and University of Mary.