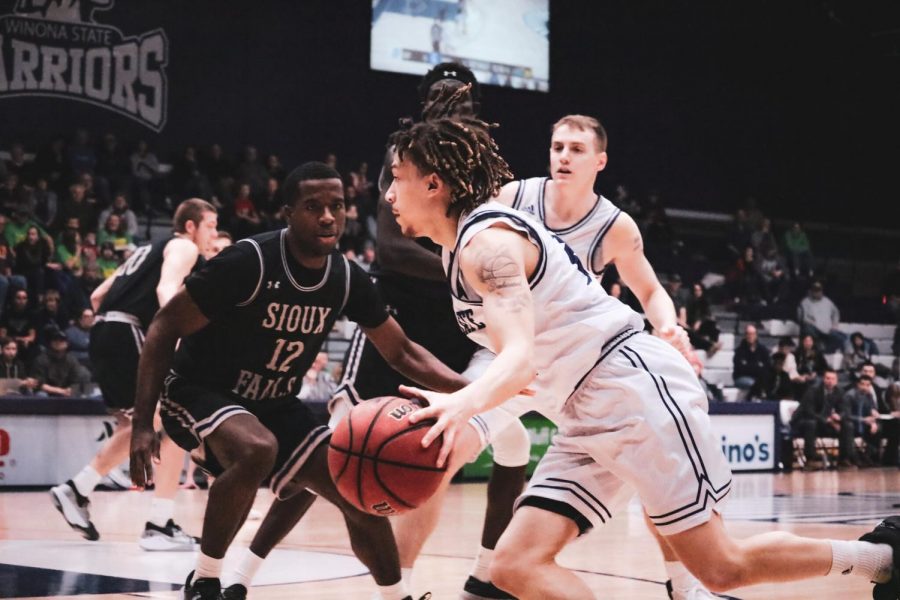 The Winona State University basketball team played their last home games of the season this weekend.

Both games were rematches of close games earlier in the season.

In the first game, the Warriors would take on University of Sioux Falls who they lost narrowly to in overtime in the first meeting.

The game would start slowly as both could not get much going, and the Warriors did not get their first points until 14:19 left in the half.

As the game went on, the Warriors would get it together as they took a 15-14 lead with 5:13 remaining in the first half.

The Cougars would get the lead back briefly before the Warriors would regain it.

Despite only making one three-pointer and shooting only 25% from the field, the Warriors kept the lead because they were able to get to the free throw line.

The Cougars shot 45% from the field but they did not make any three-point attempts or free throws.

The Warriors began the second half with two made free-throws by senior guard, Caleb Wagner.

Winona State responded with three jumpers to get the lead back to six.

But later in the second half, the Cougars would take a 36-35 lead with 8:09 left in regulation.

On the next possession for the Cougars, they hit two free throws to close the game and win 51-49.

After a dramatic loss, the Warriors looked to bounce back against Southwest Minnesota State University.

The Warriors started the game quickly with a three-pointer by Wagner.

The score stayed close, as there would be 10 lead changes and three ties in the opening half.

The first significant lead was by the Mustangs when they held a 24-18 lead with 5:07 remaining in the first half.

Winona State would then go on a 9-2 run to take a one-point lead following a put-back dunk by junior forward Andrea Lo Biondo.

The Warriors closed out the first half with a 28-29 lead.

Like the day prior, the Warriors were not able to shoot 40% from three-point range or from the field.

On the defensive end, they were able to hold the Mustangs to only two made three-pointers, but they shot over 45% from the field.

The second half continued to be close as both traded buckets.

The Mustangs were able to pick up the pace later in the second half and gain an eight-point lead, which was largest of the game at that point.

Then, the Warriors responded with a 13-3 run to gain a two-point lead with only 5:48 remaining in regulation.

Winona State kept it going and got their lead to double-digits as they won 68-56.

Senior Caleb Wagner, who added 29 points on his last home game, expected to be excited but also sad because of his college career coming to an end.

Wagner said the team knows their ability to beat any team.

“I mean, just every game competing we know we can beat any team,” Wagner said. “Sioux Falls is the top team in the south and we lost to them. We should have beat them.”

The Warriors have two games on the road next weekend against Concordia University and Minnesota-State Mankato to finish the regular season.